Start a Wiki
watch 01:03
What is Central Perk?
Do you like this video?

Central Perk is a coffeehouse in New York on NBC sitcom Friends.

The six main protagonists frequently visited Central Perk throughout the series. It is situated in New York City's Greenwich Village, in the same apartment block as Monica's apartment. It was where they spent much of their free time conversing. There are 97 steps away from Chandler and Joey's apartment as Joey counts in The One With George Stephanopoulos. In every episode, the gang somehow always ends up getting the same set of chairs, and the couch. In many episodes fans have noticed a "Reserved" sign on the main table of the area.  This is also sometimes on the side table (on the left of screen).

Rachel works as a waitress at Central Perk from autumn 1994 until winter 1996/1997. Being pretty much a spoiled, self-centered individual throughout this period of her life, Rachel clearly shows ineptitude at work, mixing up orders, neglecting her waitressing duties, and showing little care about where everything goes and how it should be done. Ironically, in The One With The Flashback, it is revealed that prior to getting this job, while out with her friends one night, she had responded to a waiter getting their drinks mixed up by remarking: "how hard is it to get a couple of drinks?". When Joey starts working at Central Perk, Rachel mentions that she would sneeze on the food of any customers who were rude to her.  She also told Ross this when they had dinner with her father in The One With The Race Car Bed  when she revealed she served sneezers to rude customers.

It quickly becomes clear that Rachel does not care for her job at Central Perk, only for her financial income. However, she does try for other job opportunities in fashion (mostly during Season 1), with little success. In Season 3, she decides to pursue the fashion business again after Gunther assigns her to re-training, quitting her waitressing job to work with Fortunata Fashions, then moving on to Bloomingdale's.

Joey becomes a waiter at the coffee shop half-way through Season 6. His acting career being at a standstill, Joey is tight on money, so much that he can't afford paying for coffee. Gunther decides to let him work there. Like Rachel, Joey shows ineptitude at the job. Unlike Rachel, however, this is mostly due to his immaturity coinciding with the house's policies. However, later in the season, Joey's acting career takes a step forward when he gets the lead role in Mac & C.H.E.E.S.E.. This makes him quit his waitering job, which he does without mentioning anything to Gunther. Gunther, however, points this out to him in The One Where Paul's The Man, and that he was going to fire Joey anyway.

Phoebe Buffay was also a regular fixture in Central Perk, and played songs such as Smelly Cat to often bemused audiences. Phoebe was, at one point, replaced by Stephanie Schiffer, a professional who was hired by Terry. Ross also performed his keyboard music from there twice in The One With Phoebe's Uterus. Phoebe's former singing partner Leslie also performed there at least once.

Throughout the coffee shop are small tables with chairs that extras on the show usually occupy. These, from the main camera angle, are behind the large orange sofa in the middle of the shop. The green chair on the right, the coffee table and the table and chair on the left are nearly always used as the main setting for any scenes in Central Perk. In the earlier episodes, irrespective of how busy the coffee shop became, those seats were always available. The writers turned this into a joke and, in the first episode of season three, the six main characters arrive in the shop to find their seats taken, apparently by Kevin Bright, Marta Kauffman and David Crane, the show's creators and the writers of Season Three. They then look at each other, dejected, and walk out. The artwork in the back of Central Perk was changed every three episodes (including images of King Kong and Uncle Sam), but the layout of the furniture remained largely unchanged for the entire series.

The most prominent fixture of Central Perk is the large orange couch that the characters usually sit on. It usually seats four of the Friends at one time. One of the others then occupies the green chair on the right and, if all six are present, there is a table with one chair to the left that sits the last person. Rarely is anyone else ever seen on the couch and the guys consider it their own. In one instance, Chandler is seen sitting reading, when a young man comes in and goes to sit down on the green chair, only for Chandler to promptly usher him away. Another example is when Rachel complains about sitting by the window instead of the couch, or when the Friends came in only to see the couch taken, and leave. In The One With The Bullies two bullies 'steal' the seating area, and also steal Chandler's hat. In 'The One With The Ultimate Fighting Champion', Robin Williams and Billy Crystal come in the coffee house and ask the cast to move over. They are sitting there having a personal conversation, which the cast overhears.

The couch is also seen in the opening credits of the show in front of the large fountain the cast of Friends dance in. At the end of the credits all of the friends sit on the couch at once as Monica turns off the lamp to the right.

In The One With Rachel's Sister, Joey says the following prices:

The Central Perk coffee house, one of the principal settings of the series, has inspired various imitations. In 2006, Iranian businessman Mojtaba Asadian started a Central Perk franchise, registering the name in 32 countries. The decor of the coffee houses is inspired by Friends, featuring replica couches, counters, neon signage and bricks. The coffee houses also contain paintings of the various characters from the series, and televisions playing Friends episodes. James Michael Tyler, who portrays the Central Perk manager in the series, Gunther, attended the grand opening of the Dubai cafe, where he worked as a waiter.[101] Central Perk was rebuilt as part of a museum exhibit at Warner Bros. Studios, and was shown on The Ellen DeGeneres Show in October 2008.

Jennifer Aniston revisited the set for the first time since the series finale in 2004.[102] From September 24 to October 7, 2009, a Central Perk replica was based at Broadwick Street, Soho, London. The coffee house sold real coffee to customers and featured a display of Friends memorabilia and props, such as the Geller Cup from the season three episode "The One with the Football".[103] In 2009, a dance remix of the song "Smelly Cat" became a popular Internet meme.[104] In Beijing, business owner Du Xin opened a coffee shop named Central Perk in March 2010. There were also three Central Perks in Liverpool, UK but all closed in 2016. 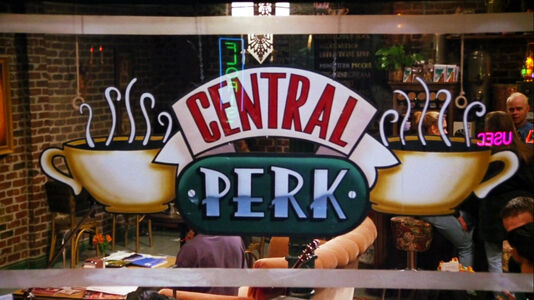 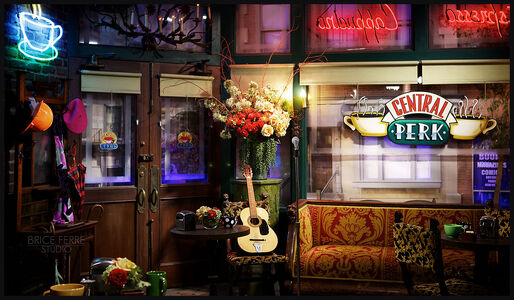 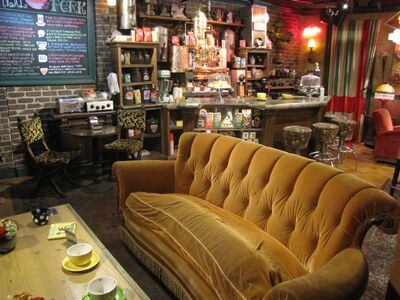 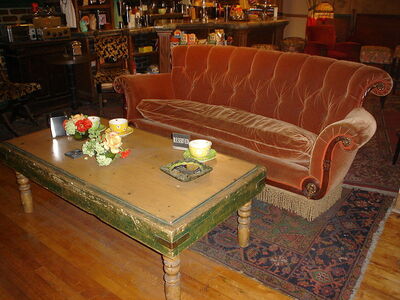 Retrieved from "https://friends.fandom.com/wiki/Central_Perk?oldid=86231"
Community content is available under CC-BY-SA unless otherwise noted.