"The One With The Ultimate Fighting Champion"

"The One With The Jellyfish"

"All right, I was 15. It was my best friend, Ruth. And we got drunk on that hard cider, and then suddenly, I don't know, we were making out."
—Bonnie telling a story to Chandler and Ross.[src]

Bonnie is a friend of Phoebe's who becomes Ross' girlfriend, portrayed by Christine Taylor.

Bonnie is distinctly remembered by Rachel for having a bald head. Phoebe asks Rachel if she could set Bonnie up with Ross, and Rachel deviously agrees, thinking that Ross would not be interested due to Bonnie being bald. However, when Phoebe does introduce Bonnie to Ross, it is revealed that she is very attractive and does, in fact, have hair. Ross and Bonnie then become a couple. Rachel takes Phoebe outside the coffeehouse and begins to complain that Phoebe told her that Bonnie was bald. Phoebe explains that she was bald but that she is not anymore. They then walk by the window of the coffeehouse and see Bonnie and Ross sitting together on the sofa with Bonnie's hand on Ross' leg. Rachel is very upset by this as she fears that Ross is going to fall in love with Bonnie.

In the next episode and finale of Season 3, "The One At The Beach", Bonnie and Ross are still dating, and Rachel is very jealous. The opening scene of the episode is the gang and Bonnie in Central Perk. Bonnie, Ross and Chandler are talking about Bonnie's first sexual experience, and how it was with a woman. She also states all of the countries and places that she has had sex in. This causes Rachel to cattily moan to Monica about how Bonnie does not talk about anything but sex. Phoebe then walks in and asks the group whether they can all go to the beach so that Phoebe can see a friend of her mom's that she has discovered from her mother's yearbook and an old graduation photograph. Bonnie then tells the group that she cannot go because she has to work. 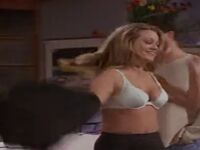 Upon arriving at the beach, Ross and Rachel start flirting. Joey suggests that the group play Strip Poker because it is raining outside and they are all very bored. Everybody initially says no, but as there is nothing else to do, they eventually agree and Joey eagerly goes to look for playing cards. He can only find a Happy Days board game, so they play that instead. The gang all volunteer Joey to strip. He gets down to his boxers, and Bonnie walks in. Rachel, after expressing to Monica her hope that one day Ross and herself will start dating again, is distraught to see her. Bonnie asks what the group is doing. Joey cheerfully tells her that they are playing "Strip Happy Days Game", so Bonnie says that she will catch up and takes off her shirt. Later on in the episode; in the morning; the group complain about the noise that Bonnie and Ross were making last night. The happy couple then walk down the stairs and say what a good night they had.

Rachel is outside the beach house reading when Bonnie walks up and asks what happened to her. Rachel, not wanting to admit that she was avoiding her, quickly evades the question. Bonnie then says how funny Joey and Chandler are, explaining how she jumped off the pier and her swimsuit came off. Understandably, Rachel is disgusted by this. Bonnie then complains about how she brought half of the beach back in the hair and says how easier it was when she used to shave her head. Rachel then lies, and tells her how much she loved her look when she was bald, and that Bonnie should do it again if it bothers her that much. She also lends her a razor to do so. 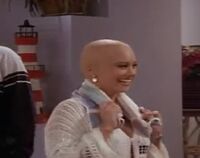 Later on, Bonnie walks down the stairs and to everybody's shock, she has shaved all of her hair off. Ross looks uncomfortable and asks her what she has done. Bonnie asks whether he likes it and asks him to touch her naked head. He hesitantly puts his hand on her head and says "You can feel all of the bones in your skull,". Bonnie then runs off outside to go back to the beach and Ross finds out that Rachel gave her the razor to shave off her hair. He also complains that he can see the moonlight bouncing off of Bonnie's head. Rachel then loses it and reveals that she does not find it easy to see Ross with Bonnie and says that she and Ross only broke up because she was mad at him, not because she stopped loving him. Both of them then admit to one another that they still love each other, and share a kiss. However, they are interrupted by Joey and Chandler arguing about Joey wanting them to privately play Strip Poker together for practice. Rachel then tells Ross that she is going to bed, hinting that she wants him to follow her.

At the end of the episode, Ross is seen standing in the hallway of the beach house between the bedroom doors of Bonnie and Rachel, wondering which girl to stay with. In the premiere of Season 4, "The One With The Jellyfish", Ross chooses Rachel, and goes to break up with Bonnie. Bonnie is last seen onscreen in Rachel's bedroom, with Rachel helping her to apply sunblock on her sunburnt head. Ross later confirms that he has broken up with her.