Start a Wiki
watch 01:04
Welcome to Chandler and Joey's Apartment
Do you like this video? 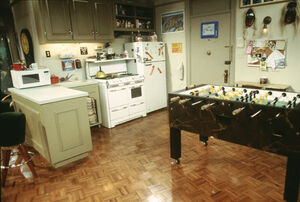 Chandler and Joey's apartment is located in Greenwich Village in Manhattan. The apartment served as a regular set-piece, but in terms of the show's main action, it was not as central a setting as Monica's apartment or Central Perk. It acted not so much as a gathering place for the six friends, but as more of a sanctuary for its two residents, where they could drink beer, watch Baywatch, relax in their barcaloungers, and play games such as Foosball, video games on a Nintendo 64 or PlayStation, 'hammer darts', 'fireball' and the less-popular 'ultimate fireball'. It was also the home of The Chick and The Duck and the entertainment unit. It was generally a mess, in stark contrast to Monica's apartment, which she always kept neat and tidy.

Finally, it was considerably more modest than Monica's apartment, and was considered generally realistic for two men of average income to afford in New York.

The apartment was a testament to Joey and Chandler's lazy lifestyle. When their kitchen table broke, rather than replace it with another, they instead purchased a Foosball table and resolved to eat over the sink. When Chandler's bedroom door was accidentally sawn in half, it was left that way until the time when Monica and Rachel live there when the two parts are somehow stuck together. However the cut in the door remained visible for the rest of the series.

The guys' apartment is the only place, other than Monica's apartment, that all the friends have lived in; 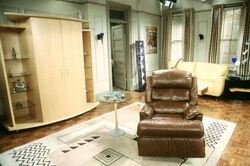 The only relatively consistent decorations in the apartment were a framed picture of Laurel and Hardy, statues of The Three Stooges, the two reclining armchairs, the Foosball table, a poster for the 1914 French silent film and novel Les Mystères de New-York, a large white plastic dog that Joey had acquired while working on Days of Our Lives and a Magna Doodle on the front door, on which little jokes were often written.

The black and white Laurel and Hardy picture is actually a photo still from their 1928 Leave 'Em Laughing. There is also a Scarface poster in Joey's room, as well as a great Guinness poster.

The apartment was refurbished rarely but substantially through the series. In Season 1, there were shelves in the kitchen between the refrigerator and the door to act as a pantry, but the shelves are not there for subsequent seasons. In "The One Where Ross And Rachel... You Know", Joey took the chance to acquire a big-screen TV and a couple of black barcaloungers. These remain in the apartment until "The One With The Cat", when the guys are robbed of everything except for the white dog and the entertainment unit built by Joey. During the first part of Season 4, the guys' apartment contains rusty patio furniture which Joey and Chandler had found downstairs (they also later acquire a small TV). After kissing Kathy, Chandler re-furbishes the apartment with a new entertainment unit (one which opens and closes with a remote), a new big-screen TV, a stereo, and two new brown barcaloungers. Although Joey decides to send everything back after learning about Chandler's kiss, the guys make up and eventually keep the furniture. In late season 4, while Monica and Rachel are forced to live in the apartment, Monica tears out the carpet and replaces it with hard wood flooring, which remains even after Chandler and Joey switch back in. It's not before the sixth season that Chandler separates the barcaloungers to take one of them to his new apartment at Monica's. By the seventh season, it is known that Joey has given names to his furniture and decor - his barcalounger is named Rosita; and the TV is known as Stevie the TV. When Rachel breaks Joey's barcalounger 'Rosita' she gets him a black La-Z-Boy E-cliner 3000. 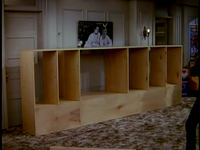 "The One With Frank Jr." is when Joey decides to build a place for the mail. However, he decides to take his construction "to the next level", and evolves the place for the mail into a fully-fledged entertainment unit. By the end of the episode, the entertainment center is ready and Joey and Chandler set it up with the help of their friends; the center is so wide that it covers the doors of the bedrooms. Although Chandler highly disapproves of the unit (mainly because its construction phase was characterized by a series of accidents in which he ends up with a varnish lid stuck to his pants and almost gets his face drilled by Joey), he puts up with it through the third season, by which time the unit also becomes a home for the chick and the duck.

Chandler and Joey keep the unit until the start of the fourth season ("The One With The Cat"), when the guys decide to sell the unit. Joey tries to sell the unit to a guy, who looks quite skeptic about it. Joey points out how compartments of the unit are "big enough to hold a grown man", and he fits into it to prove the point, after which the buyer locks Joey in the unit and robs the guys' apartment of almost everything. Not many options are left to Chandler and Joey so at this point, and they are forced to trade their unit for a canoe.

Retrieved from "https://friends.fandom.com/wiki/Chandler_and_Joey%27s_apartment?oldid=80452"
Community content is available under CC-BY-SA unless otherwise noted.