Friends Central
Register
Don't have an account?
Sign In
Advertisement
in: Actors, Cast and Crew, Season 1 Actors,
and 9 more

View source
watch 02:24
Wiki Targeted (Entertainment)
Do you like this video?
Play Sound

Courteney Bass Cox (formerly Cox Arquette; born June 15, 1964) is an American actress, film producer, and former model. She plays the role of Monica Geller on Friends. She was the most well known actress of the principal cast and became even more famous by starring in the Scream tetralogy.

Courteney was born Courteney Bass Cox in Birmingham, Alabama to a wealthy Southern family. Her mother, also named Courteney (née Bass) and her late father, Richard Lewis Cox, was a contractor. Cox has two older sisters (Virginia McFerrin and Dottie Pickett), an older brother (Richard, Jr.) and nine half-brothers and half-sisters. Her parents divorced in 1974, and her father eventually wound up in Panama City, Florida, where he opened a company called Cox Pools, while Cox grew up with her mother and her stepfather, New York businessman Hunter Copeland.

Courteney was raised in a wealthy suburb of Birmingham, Mountain Brook, Alabama where she was known as CeCe. She attended Mountain Brook High School, where she was a cheerleader, tennis player and swimmer. Upon graduation, Cox went to study architecture and interior design at Mount Vernon College for Women. She dropped out after a year to pursue a modeling career, after being signed by the Ford modeling agency in New York City. While modeling, she also took acting classes and worked to lose her southern accent.

Cox first came to prominence in the 1984 music video for Bruce Springsteen's "Dancing in the Dark" (in which she was the pulled-on-stage girl who danced onstage with Springsteen for 26 seconds). Cox is also notable for being the first person to use the word "period" on U.S. television in its physiological sense, in a 1985 advertising campaign for Tampax brand tampons.Her early film roles include Masters of the Universe (1987) and Cocoon: The Return (1988). Cox's early television work include a starring role in the short-lived television series Misfits of Science (1985), and later a recurring role (1987 - 1989) on the television series Family Ties as the last girlfriend of Alex P. Keaton (Michael J. Fox). She had a supporting role as Jewel, the hard-as-nails assistant to Jim Belushi's character in the 1990 fantasy film Mr. Destiny. In 1994, Cox appeared as Meryl, Jerry's girlfriend/pretend wife on the hit TV sitcom Seinfeld.

After appearing in the Jim Carrey comedy Ace Ventura: Pet Detective (1994), Cox found fame playing Monica Geller on the hit TV series Friends (1994-2004). She'd originally been asked to audition for the part of Rachel Greene, but she asked for the opportunity to audition for the role of Monica. This was the role for which she would become most famous. The six principal cast members, including Cox, became household names.

During her time on Friends, Cox appeared in the highly successful and high-profile Hollywood films Scream (1996), Scream 2 (1997), and Scream 3 (2000) as the ruthless reporter Gale Weathers. While filming the first of this trilogy, she met her husband David Arquette. Although she starred in several other films during her time on Friends, none achieved the same level of success as the show. Such films include The Runne, 3000 Miles to Graceland and The Shrink Is In. In late 2003, Cox produced the television series Mix It Up. The lifestyle show received low ratings and was not renewed for a second season.

After her Friends role, Cox was producer Marc Cherry's first choice to be offered a starring role as Susan Mayer on Desperate Housewives. However, Cox was unavailable due to her pregnancy and the role went to Teri Hatcher. A couple of years later, Cox signed a deal with ABC Television Studio (formerly Touchstone Television), to star in her own series.

Since Friends, Cox has primarily concentrated on her family but has starred in the independent film November (2005), which had a limited theatrical release, co-starred with Tim Allen in the critically derided Zoom and cameoed in the big budget remake of The Longest Yard, as the girlfriend of Adam Sandler. Cox later said her breasts were digitally enhanced to portray her role as the wife of a quarterback. In 2006 Courteney supplied her voice for the animated film Barnyard.

In 2008, Cox played Lucy Spiller, a tabloid editor, in Dirt, a television drama for the FX Networks. Cox and her then husband, David Arquette, were the executive producers of the series. The same year she appeared again with Adam Sandler in Bedtime Stories, which was initially released in Belgium on December 25.

In 2009, Cox starred in Cougar Town, created by Bill Lawrence (creator of Scrubs), as Jules Cobb. The show ran for six seasons, the final episode airing on March 31, 2015.

In early 2011, Courtney Cox portrayed an author called Gale Weathers in Scream 4 the 4th film of the Scream series. This was 11 years after he portrayal as the same character in 2000.

Courteney married actor David Arquette on June 12, 1999. They were together for 11 years before they announced their separation on October 11, 2010. After being separated for almost two years, Arquette filed for divorce in June 2012.

On June 13, 2004, she gave birth to their first child, daughter Coco Riley Arquette. The child was originally to be named after her mother as Courteney Cox Arquette. However, Arquette's family objected to this on the grounds that naming a child after a living relative goes against Jewish tradition (David Arquette's mother is Jewish). Coco is a nickname Cox's friends gave her mother when she was a child. Jennifer Aniston is CoCo's godmother.

In June 2007, Cox announced plans to expand her family. The actress said she hopes to have a child through in vitro fertilisation despite battling post-partum depression after Coco's birth.

In late 2013, Courteney began dating Johnny McDaid, a member of the band Snow Patrol. They announced their engagement on June 27, 2014. 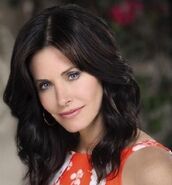 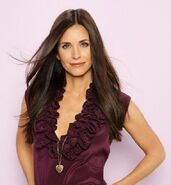 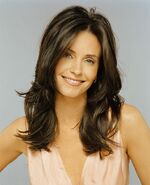 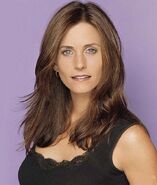 Bruce Springsteen's music video of dancing in the dark