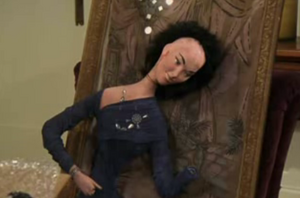 Gladys is a piece of artwork created by Phoebe Buffay. It is a three-dimensional picture of a woman (often semi-bald and with black hair) popping out of the frame. Gladys is an old piece, based on its presence throughout the entire series, and is implied to have existed for an undisclosed period of time before the series properly started (although longer than three years before most of the members of the gang met for the first time), as seen in "The One With The Flashback".

In "The One With Ross' Grant", Phoebe gives Gladys to Monica because Mike hates it. When Rachel finds out, and knowing how high maintenance Monica is, she mocks her for being stuck with the picture. Monica then attempts to give the picture to Rachel in two different occasions, although she fails both times. Nonetheless, she manages to sell it to Joey when Rachel is not around. Not being able to convince Joey to return the picture back to Monica, Rachel then tells him that Gladys is haunted and that every night she comes out of her frame, starts crawling with her one free hand, and looks for legs to steal. Terrified, Joey demands Rachel to take the picture away. This results in a big fight between Rachel and Monica over who gets to keep it. At that moment, Phoebe enters the apartment and tells them they don't need to worry anymore, because whoever that doesn't get Gladys will get Glyniss, a new piece similar to Gladys she has just created (but with white skin, ghastly makeup and baby dolls floating around her). Horrified by the even more dreadful sight that is Glyniss, the two girls then really start fighting over who gets to keep Gladys.

In "The One With Phoebe's Dad", Gladys can be seen hanging in Phoebe's grandmother's apartment, although this time she's dressed in red.

Retrieved from "https://friends.fandom.com/wiki/Gladys?oldid=87631"
Community content is available under CC-BY-SA unless otherwise noted.