Emma (for a short while owner)

The One With The Inappropriate Sister

Huggsy is Joey's stuffed penguin, as well as his "bedtime penguin pal". He was originally mentioned accidentally by Joey, who described him as his "bedtime penguin pal", in the episode "The One Where Everybody Finds Out". He did this as to show that he did in fact have a secret, although he continued to deny his existence. Huggsy is first seen, however, in "The One With The Inappropriate Sister", sitting on a bar stool in Joey and Chandler's apartment near the beginning of the episode. At this point Huggsy is without the goggles and waistcoat seen in later episodes.

In "The One With Ross' Teeth", Huggsy is on the chair beneath the dartboard when Chandler and Joey talk at the beginning of the episode.

In "The One With All The Cheesecakes", Huggsy is sitting on the couch in Joey's apartment.

In "The One With The Videotape", Huggsy was sitting on the couch when Ross helps Rachel out with her work.

In "The One With The Memorial Service", Rachel and Emma moved in, Emma became attached to Huggsy. Jealous, Joey bought her a Brand New Huggsy so he could take the original back, but Emma sensed the difference. Although Rachel tried to convince Joey to let Emma keep Huggsy by arguing that the penguin reminded Emma of her Uncle Joey, he still attempted to steal back the original. When Rachel asks how Joey can take Huggsy from a little child, he retorted, "How do you think I got him in the first place?"

Joey later brings Huggsy to LA with him and he is seen on his bed in several episodes. It is seen Alex does not like Huggsy watch her and Joey makeout and stuff.... 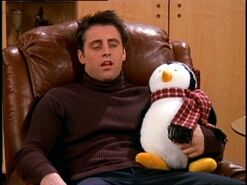 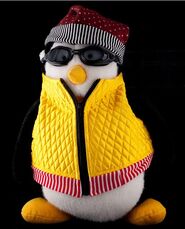 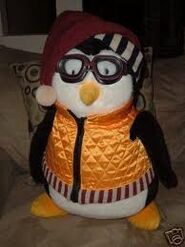