Jennifer Joanna Aniston (born February 11, 1969) is an American film and television actress. She plays the role of Rachel Greene on Friends, a role for which she won both an Emmy Award and a Golden Globe Award.

She has starred in several Hollywood films, often alongside a member of the Frat Pack. While most of her film roles have been in comedies such as Bruce Almighty, Office Space, Rumor Has It, and the romantic comedies Along Came Polly and The Break-Up, she has also appeared in films from other genres, such as the crime thriller Derailed.

Aniston was born in Sherman Oaks, California, to actor John Aniston and actress Nancy Dow, and grew up in New York City. Aniston has two half-brothers, John Melick (older) and Alex Aniston (younger). Aniston's father is a Greek American born on the island of Crete, Greece, while her mother was born in New York City of English, Scottish and Italian descent. Aniston's godfather was the late actor Telly Savalas, her father's best friend. Aniston lived in Greece for one year as a child with her family, and they later relocated to New York City. Her father has appeared in the soap operas Days of our Lives, Love of Life, and Search for Tomorrow.

She also co-starred in Ferris Bueller, a television adaptation of the 1986 hit movie Ferris Bueller's Day Off. The series, however, was quickly cancelled. Aniston then appeared in two more failed television comedy shows, The Edge and Muddling Through, and guest-starred on Quantum Leap, Herman's Head, and Burke's Law. After the string of cancelled shows, along with her appearance in the critically derided 1992 horror film, Leprechaun, Aniston considered giving up acting. Aniston's plans changed, however, after auditioning for Friends, a sitcom that was set to debut on NBC's 1994-1995 fall line-up. The producers of the show originally wanted Aniston to audition for the role of Monica Geller, but she persuaded them that she was better suited for the role of Rachel Greene. She was cast in the role and played the character from 1994 until the show ended in 2004. The program was hugely successful and Aniston, along with her co-stars, gained wide renown among television viewers. Her hairstyle at the time, which became known as "The Rachel", was widely copied. Aniston received a salary of one million dollars per episode for the last two seasons of Friends, as well as five Emmy nominations (two for Supporting Actress, three for Lead Actress), including a win for Outstanding Lead Actress in a Comedy Series. According to the Guinness World Book of Records (2005), Aniston (along with her female co-stars) became the highest paid TV actress of all time with their $1 million-per-episode paycheck for the tenth season of Friends.

In 2007, Aniston guest starred in an episode of Courteney Cox Arquette's series Dirt. Aniston played Arquette's snobby rival Tina Harrod. In addition to acting, Aniston has also directed a hospital emergency room-set short film named Room 10, starring Robin Wright Penn and Kris Kristofferson; Aniston has noted that she was inspired to direct by actress Gwyneth Paltrow, who directed a short film in 2006. They are now the best of friends.

In 2011, Jennifer Aniston played the sex obsessed dentist Julia in Horrible Bosses, reprising the role for the sequel Horrible Bosses 2 in 2014. In 2019 she co-starred with long-term friend Adam Sandler in Murder Mystery

In 2019 Jennifer began the filming of a new sitcom, The Morning Show, which also stars Reese Witherspoon who played Jill Greene, Rachel's youngest sister, in two episodes of Friends. Filming of Season 2 was suspended in March 2020 due to the Coronavirus pandemic.

Aniston has previously dated musician Adam Duritz, and was previously engaged to actor Tate Donovan before breaking up. Her high-profile relationship with actor Brad Pitt was frequently publicized in the press. She married Pitt on July 29, 2000, in a lavish Malibu wedding. For years their marriage was considered the rare Hollywood success. However, when Pitt showed up to his Ocean's Twelve premiere without his wife, rumors that their relationship was on the rocks began. In early January 2005, the couple was seen vacationing in the Caribbean with her Friends co-star Courteney Cox and her then husband, actor David Arquette, and photos on the beach showed them kissing and affectionate. They shocked their fans several days later when they announced their separation on January 7, 2005.

She has also stated that she was devastated by the death of her longtime therapist, whose work helped to make the separation from Pitt easier. Aniston has said that her relationship with Pitt, which she does not regret, was "seven very intense years together" and that "it was a beautiful, complicated relationship." Since the couple's divorce, Aniston has been romantically linked with actor Vince Vaughn, British model Paul Sculfor, actor Orlando Bloom and singer John Mayer.

In August 2006, Aniston denied rumors that she was engaged to Vaughn or that the actor had proposed. In October 2006, gossip magazine Us Weekly quoted sources from Vaughn that the couple had broken up. In December 2006, representatives for both Aniston and Vaughn confirmed that they had indeed split up a few weeks before when Aniston visited Vaughn in London.

Aniston is also a supporter of Friends of El Faro, a grassroots non-profit that helps raise money for Casa Hogar Sion -- an orphanage in Tijuana, Mexico and has appeared in a few advertisements on TV for St. Jude's Children's Research Hospital.

She is stated to be the godmother of best friend and actor Courteney Cox's child Coco.

On August 12, 2012, People Magazine reported that Jennifer and Justin Theroux were engaged. They were married on August 5, 2015. Lisa Kudrow attended, and Courtney Cox was the maid of honor. The couple announced that they were separating on February 15, 2018. They formally divorced in 2019.

Aniston became one of the highest-paid TV actresses in history when she earned $1 million per episode for her role as Rachel Greene during the last two seasons of Friends.

Aniston received five Emmy Awards nominations for her work on Friends,winning once for Outstanding Lead Actress in a Comedy Series.

Aniston's most successful film was Bruce Almighty in 2003,which grossed $485 million worldwide. 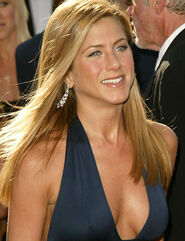 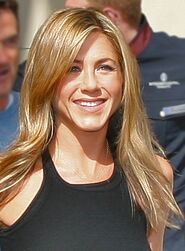 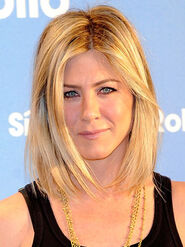 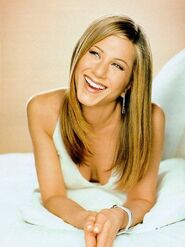 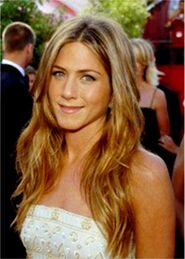 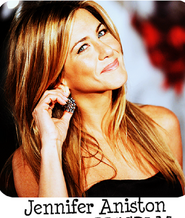 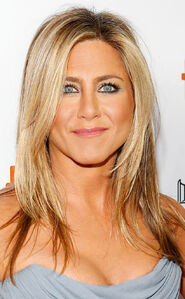 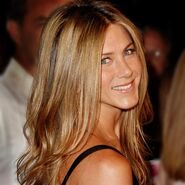 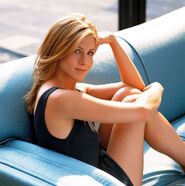 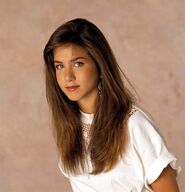