watch 01:16
Welcome to Monica's Apartment
Do you like this video?
Play Sound

Monica's Apartment, later Monica and Chandler's Apartment, is one of the two most used set pieces in the show.

Every single one of the main 6 characters has lived here at some point, as noted below. 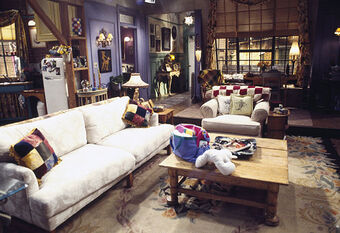 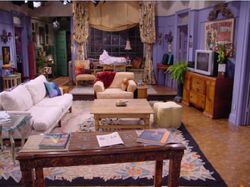 The walls are painted purple in the living room. The apartment has an open plan for the main living space, mainly comprised of the kitchen and the living room. The apartment has two bedrooms, a bathroom and a balcony in addition to the main living area. There is a door beyond the bathroom that is never opened after Season 1 or mentioned until "The One With The Secret Closet", in which it is revealed that it is full of Monica's disorganized junk. There is a vintage French poster advertising a rocking horse over the television area. It is one of the advertising posters that Jules Cheret designed for a department store in Paris that was known as "Aux Buttes Chaumont". The French Jouets poster is specifically advertising children's toys ("jouets" means toys) and features a beautifully decorated rocking horse, one of the most desired and expensive gifts a child could receive in those days. 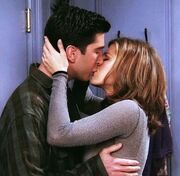 There is a gold frame around Monica's peephole (the door also is the same purple as the apartment) This frame was originally a mirror, and one of the crew members broke it. It was temporarily hung on the door, but Greg loved it and the frame stayed there ever since. This frame has become an icon of Friends.

Together with boys' apartment and the coffee house Central Perk, Monica's apartment is where most of the episodes take place.

Although the apartment set was constructed with three walls, a fourth wall can be seen during inward scenes (usually from the balcony). This wall was dismounted during normal shots so that the audience can get a clear view of the apartment set.

The following lived in Monica's apartment but are never actually shown during the episodes:

The following are residents of Monica's apartment at one time or another during the series:

Retrieved from "https://friends.fandom.com/wiki/Monica%27s_Apartment?oldid=87855"
Community content is available under CC-BY-SA unless otherwise noted.