View source
watch 01:52
Episode Recap: The Last One, Part 1
Do you like this video?
Play Sound

The One With Rachel's Going Away Party

"The Last One, Part 1" is the first of the two-part series finale of Friends, which aired on May 6, 2004. It serves as the seventeenth and eighteenth episodes of season ten; Part One and Part Two ran as one episode. 52.5 million viewers tuned in for the finale when it was originally broadcast. It was written by series creators David Crane and Marta Kauffman, and directed by executive producer Kevin S. Bright.

As Chandler and Monica continue packing their apartment to move to the suburbs, Erica goes into labor three weeks early and they take her to the hospital. Chandler has a hard time getting along with Erica when left alone in the delivery room with her and makes several awkward jokes. Monica and Chandler watch their child, a boy, being born. Just as they're thanking Erica, the obstetrician warns them not to get too relaxed, as a second baby is on it's way shortly. Though shocked that Erica is having twins, Monica and Chandler quickly decide to happily adopt both babies. They name the boy Jack (after Monica's father) and the girl Erica (after her birth mother).

Meanwhile, Ross and Rachel sleep together at his place, leading Ross to realize that he wants to get back together. But when Ross comes to visit her in the morning, Rachel says that this was "the perfect way to say goodbye" and continues preparing for her flight to Paris. After talking with Joey and Phoebe at Central Perk, Ross decides to tell Rachel about his feelings before she leaves. But just as Ross approaches Rachel, he is interrupted by Gunther, who professes his love to her. She rejects him as sweetly as possible, but Ross, having seen Rachel rejecting Gunther, decides not to reveal his true feelings for Rachel.

When Monica and Chandler come home with the twins, Mike and Phoebe decide that they too want to start having kids. After meeting the twins briefly, Rachel says a tearful goodbye to Ross and gets in a taxi to the airport.

After Rachel leaves, Ross realizes he has to tell her how he feels. Phoebe and Ross chase Rachel in Phoebe's taxi to catch her at the airport before she takes off.

The series' creators completed the first draft of the hour long finale in January 2004, four months prior to its airing on May 6. Before writing the episode, David Crane, Marta Kauffman, and Kevin S. Bright decided to watch finales from other sitcoms, paying attention to what worked and what did not. Kauffman found that they liked the ones which stayed true to the series, and they found the finale of The Mary Tyler Moore Show to be the gold standard. The writers had difficulty writing the finale, and spent several days thinking about the finale scene without being able to write a word. Crane said that they did not want to do "something high concept, or take the show out of the show".

The music playing as the camera pans across the empty apartment at the end of the episode is "Embryonic Journey" by Jefferson Airplane. The song "Yellow Ledbetter" by the rock band Pearl Jam is featured in the episode making it the first Pearl Jam song to be licensed for a television show. A spokesperson of the group said it was "simply a matter of the show's producers asking permission".

The episode was filmed in Los Angeles, California on Stage 24 at Warner Bros. Studios, where Friends had been filmed since its second season. The first part was taped on January 16 and the second on January 23, 2004. The episode was the only episode of Season 10 to be shot in 2004. After the series finale, Stage 24 was renamed "The Friends Stage".

A month before the taping of the final episode, Aniston said that with each episode it got "harder just to read the lines". She explained that the cast was "all just nerves and raw emotions [...] No one knows how to feel. We may need to be sedated on the last night". The producers promised a tearful ending, and the cast admitted their crying was not faked when they filmed their scenes. LeBlanc revealed that it had been too much for him and the rest of the cast. He said that Kudrow started crying first, and when he looked at Aniston and Cox they were "upset". Schwimmer, who LeBlanc thought was the "consummate professional", was also upset so LeBlanc "just lost it". Maggie Wheeler, who was Chandler's "on and off" girlfriend Janice, told People that "the entire cast had to go back and have their makeup redone before starting," and that Perry "broke the tension" by saying: "Somebody is gonna get fired." Perry told the New York Daily News that he did not cry, "but I felt like I was about to for like seven hours".

At the start of each Friends episode taping, the cast would ordinarily be introduced to the studio audience one at a time, but for this episode, the cast headed out for their pre-curtain bow together "That made me cry", said Diane Newman, who was the script supervisor of the show. Among the specially invited audience of the taping were Hank Azaria, who played Phoebe's scientist boyfriend, David, in several episodes over the years; David Arquette, who filmed his then-wife Cox and the others backstage with a video camera; and Wheeler. Missing was Brad Pitt, Aniston's then-husband. Pitt told the producers he wanted to be surprised when the finale aired on television.

NBC heavily promoted the series finale, which was preceded by weeks of hype. Viewing parties were organized by local NBC affiliates around the U.S., including an event at Universal CityWalk featuring a special broadcast of the finale on an outdoor Astrovision screen. It was shown in New York City, where over 3,000 people watched it on big screens in parks. The finale was the subject of two episodes of Dateline NBC, one of which ran for two hours. Prior to the airing of the episode, a one hour retrospective of clips from previous episodes was shown. Following the finale, The Tonight Show with Jay Leno was filmed on the set of the Friends' Central Perk cafe, which featured the series' cast as guests. The advertising rates for the finale averaged $2 million for 30 seconds of commercial time. This was the most ever for a sitcom, breaking the record held by the Seinfeld finale at $1.7 million.

The finale was watched by 52.5 million American viewers, making it the most watched entertainment telecast in six years. Although it was not the series' most watched episode, the finale was the fourth most watched series finale in television history, only behind the finales of M*A*S*H, Cheers and Seinfeld, which were watched by 105, 80.4 and 76.2 million viewers respectively. The retrospective episode was watched by under 36 million viewers, and the finale was the second most-watched television show of the year, only behind the Super Bowl. Which means it was the most popular entertainment episode.

Reviews of the season finale were mixed to positive. Robert Bianco of USA Today described the finale as entertaining and satisfying, and praised it for deftly mixing emotion and humor while showcasing each of the stars. Sarah Rodman of the Boston Herald praised Aniston and Schwimmer for their acting, but felt that their characters' reunion "felt a bit too neat, even if it was what most of the show's legions of fans wanted." Newsday 's Noel Holston called the episode "sweet and dumb and satisfying", while Roger Catlin of The Hartford Courant felt that newcomers to the series would be "surprised at how laughless the affair could be, and how nearly every strained gag depends on the sheer stupidity of its characters."

An editorial in USA Today highlighted the view of many critics who found problem with the aging cast, commenting, "Friends was getting creaky even as it remained popular". Heather Havrilesky of Salon.com said that despite the "nauseating hype and the disappointing season and the lackluster finale, it's important to remember what a great show this was for such a very long time." Ken Parish Perkins of the Fort Worth Star-Telegram graded the finale with a B, calling it "more touching than comical, more satisfying in terms of closure than knee-slappingly funny."

Response from the cast and crew

The cast members reportedly got together in Los Angeles to watch the finale. It was well received by the main cast, who were confident that the fans would have the same reaction. David Schwimmer said: "It's exactly what I had hoped. We all end up with a sense of a new beginning and the audience has a sense that it's a new chapter in the lives of all these characters."

There were three separate wrap parties - a dinner at the Aniston's and Pitt's residence on January 19, 2004, a sit down at cast hangout Il Sole in West Hollywood on January 22, and a big party for 1,000 guests on January 24 at Los Angeles' Park Plaza Hotel. At the Park Plaza Hotel party, The Rembrandts performed the theme song of Friends, "I'll Be There For You", and the cast gave a re-enactment of the pilot episode's first scene. 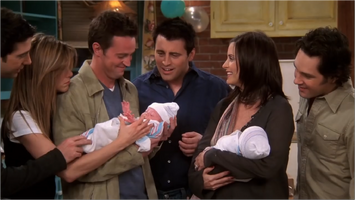 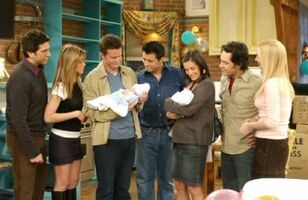 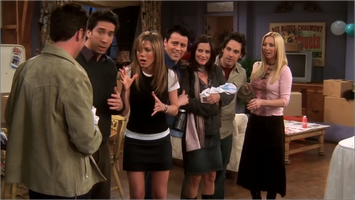