View source
watch 01:25
Episode Recap: The Last One, Part 2
Do you like this video?
Play Sound

"The Last One, Part 2" is the second of the two-part series finale of Friends, which aired on May 6, 2004. It serves as the seventeenth and eighteenth episodes of season ten; Part One and Part Two ran as one episode. 52.5 million viewers tuned in for the finale when it was originally broadcast. It was written by series creators David Crane, Marta Kauffman and directed by executive producer Kevin S. Bright.

After ending up at the wrong airport and calling Monica to verify their info, Ross and Phoebe race to the right airport. Afraid they are not going to make it in time to catch Rachel (who is actually already on the plane), Phoebe calls Rachel, telling her there's something wrong with the plane's "left phalange". The guy sitting next to Rachel freaks out and alarms the rest of the passengers, making everyone get off. This diversion is perfect for Ross, who catches Rachel just before she takes off again (also thanks to Phoebe's screaming, which makes Rachel turn around at the gates). Ross confesses his love for Rachel and says he wants to be with her, but it's too much for Rachel to take at the moment and all she can say to Ross is "I'm sorry, I'm sorry. I'm so sorry" and passes through the gates again.

As a house-warming gift, Joey has bought Chandler and Monica a new chick and duck, Chick Jr. and Duck Jr. However, when he tries to show them to Monica and Chandler, he cannot find them in his apartment. When he tells them, Chandler helps him search for the birds while Monica finishes packing. The two realize that Chick Jr. and Duck Jr are stuck inside the foosball table, which Joey and Chandler don't want to break. Breaking it apart is a piece of cake for Monica, and she busts the table open. Joey and Chandler try to hide the awkward moment they have together as best friends, but they can't hold it and hug.

Ross doesn't meet the others at Monica's apartment because he is too sad about how he left things with Rachel. He goes home and checks his messages, and finds a message from Rachel. She admits repeatedly she loves him too, and by saying it over and over she realizes she wants to get off the plane. The message is cut in the middle of an argument between Rachel and a flight attendant. Ross tries to hear the rest of the message, asking himself "Did she get off the plane?". The door opens and he hears "I got off the plane."  He turns and finds Rachel at the door. They kiss, and both state how this is going to be "it", and Ross rectifies with "Unless we're on a break" but then adds "don't make jokes now" and they resume their making out. It's assumed that Rachel and Emma move back in with Ross shortly afterwards as Rachel said "this is where I want to be" and are in a relationship.

At Monica and Chandler's apartment, which is completely empty now, the guys cherish their last moments together. It's too much for the friends to handle, and they all look tearful as they note that over the years they've all lived in the apartment at some point (including the summer Ross stayed with his grandmother while he attended dance classes in his youth). Monica tells Chandler they need to leave their keys, and it turns out that all six have a copy, though for some reason Joey's has been misplaced and he has a red lollipop as a replacement. Monica and Chandler have some time before they go to their new house, and the friends decide to go for a last cup of coffee. Chandler tries to break off the tension by asking "Where?" this being the last line of the show. They walk out of Monica's apartment. The camera slowly pans over the empty apartment while the song Embryonic Journey by Jefferson Airplane plays in the background, showing the friends' six keys on the counter, and then ends on the door. 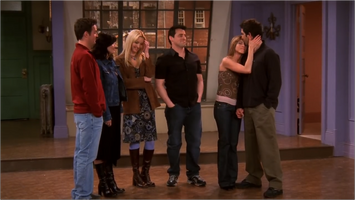 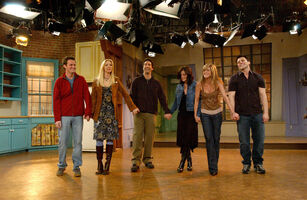 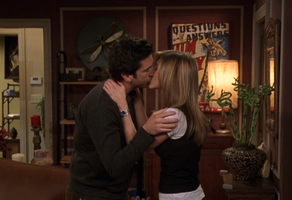 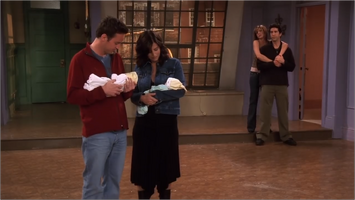