The One With The Triplets

The One With All The Kissing

The One Where Phoebe Hates PBS

"The One Hundredth" is the third episode of the fifth season of Friends, the hundredth episode in total. It aired on NBC on October 8, 1998. Phoebe has finally gone into labor and her friends rush her to the hospital.

Phoebe, Rachel, Joey, and Ross arrive at the hospital, where Phoebe tells the nurse at the desk that she's in labor. The nurse asks which of the two men present is the father, but Phoebe tells her the father is her brother, which shocks the nurse. Rachel says she is really going to miss watching Phoebe freak people out like that. Joey has a video camera and is making a video for the babies to look at some day. He asks Phoebe if there's anything she'd like to say to the triplets before it all starts, and she begs them not to hurt her too much.

Monica and Chandler arrive, quite awhile after everyone else. The others don't understand what took them so long; their cabs left at the same time. Monica and Chandler obviously made a romantic pit stop, but they try to cover their tracks by saying that Monica had to go back to the apartment because she forgot to bring her jacket. This might've worked, except Monica still isn't wearing a jacket.

In Phoebe's hospital room, Ross and Rachel enter with bad news: Phoebe's doctor fell and hit her head in the shower, so she won't make it to the birth. Phoebe is upset, but Rachel assures her that the replacement doc is wonderful, and head of the department. Phoebe is distracted by her first contraction, but finds it's not so bad. In far worse pain is Joey, who's suddenly struck with what Phoebe thinks are sympathy pains, but as Joey says, "I didn't know I cared that much."

Phoebe meets her replacement doctor, Dr. Harad. He assures her that she is in good hands, and she is temporarily reassured until he, for no obvious reason, tells them on the way out that he loves Fonzie. Frank Jr. arrives, but Alice is still missing. She is stuck in Delaware, so Frank Jr. will be Phoebe's coach until Alice arrives, but it's okay, because Alice told him all about the "Lamazda stuff".

Monica and Joey are sitting in the waiting room when Rachel enters and excitedly tells Monica that she got the two of them dates with a couple of male nurses. Monica doesn't want to go, but can't think of an excuse to get out of it without revealing her secret relationship with Chandler. Back in Phoebe's room, Joey informs the others that Monica and Rachel were asked out by the nurses, which upsets Chandler. Joey has another bout of "sympathy pains", making Phoebe think he's trying to steal her thunder.

Dr. Harad comes in and comments that Fonzie once dated triplets. Chandler asks who Fonzie is, and Dr. Harad confirms that he is indeed talking about Arthur Fonzarelli, the Happy Days character. After he leaves, Phoebe demands that Ross go find her a different doctor.

Chandler runs into Monica out in the waiting room, and she starts to tell him about what happened with Rachel and the nurses. Before she can finish, Chandler interrupts; he clearly assumes Monica is going to go out with the nurse and tries to save face by telling her he's fine with her dating the nurse, that he and Monica are nothing, they're just "goofing around". Monica says she was going to try and get out of the date, but if Chandler thinks they're just "goofing around," maybe she will go on the date after all. Joey comes in off the elevator, having just bought a few things in the gift shop, when he is hit with his third bout of pain.

Ross returns to Phoebe's room with a new doctor, but she finds a problem with this one too: he's a little young. He assures her he's fully qualified to perform the delivery, but she doesn't want to hear it and sends him away in tears, so it's back to Dr. Harad. Meanwhile, Joey is in a hospital room of his own, where a doctor informs him he is suffering from kidney stones. Joey asks the doctor if it could be anything else, but the doctor is sure it is kidney stones.

Back in Joey's room, the doctor tells him the kidney stones are too close to the bladder to attempt to break them up with shock waves so he has two options: wait until he passes them naturally, or have a procedure done which Joey finds a little too invasive for comfort. He opts for option number one.

In Phoebe's room, a male nurse enters the room, and Rachel informs Monica that this is Dan, Monica's date for Saturday night. Monica tells Dan she's really looking forward to their date, so Chandler steps up to interrogate him. He asks Dan why he's a nurse and not a doctor, and isn't being a nurse kind of girly? Dan answers that he's just doing it to put himself through medical school, and it didn't feel so girly during the Gulf War. Trying to save face, Chandler asks a female nurse out for Saturday night, and she turns him down immediately, adding to his embarrassment.

Out in the waiting room, Frank is getting off the phone with Alice's mom when Rachel approaches him. "So, Frank," she says, "Three babies. That seems like a lot, huh?" Frank laughs and says "Not to me." Rachel considers her duty to "feel Frank out" done and leaves.

In the delivery room, Phoebe's ready to give birth. Dr. Harad orders everyone except for Frank and the rest of the medical staff out of the room and tells the nurse to turn the TV on to Happy Days. At the same time, Joey's just about ready to pass his kidney stones. With help from Harad, who proves himself to despite his Fonz obsession be a highly competent doctor, Phoebe has three healthy babies, while with the help of his own doctor Joey has three healthy kidney stones. Phoebe's delivery comes with a surprise though: instead of two boys and a girl, she has given birth to two girls and a boy, so little baby Chandler is actually a girl.

A short while after all three of the triplets have been born, Chandler approaches Monica in a hallway to ask if she's really going to go out with Dan. She replies that since she and Chandler are just "goofing around" she figured why not "goof around" with Dan too. Chandler says that he doesn't know if she's ever looked up the term "goofing around" in the dictionary, but the technical definition is "two friends who care a lot about each other, and have amazing sex, and just want to spend more time together". Monica is clearly charmed by Chandler's words and forgives him. She kisses him and goes to call off her date with Dan.

Everyone is back in the delivery room holding the babies. Rachel breaks the news to Phoebe that she won't be able to keep one of the babies. Phoebe asks her friends to leave so she can have a moment alone with the triplets. They oblige, and Phoebe has a "heart to heart" with her new nieces and nephew. She tells them she wishes she could take them home and see them every day, but she will settle for being their favorite aunt, and the four of them cry together. 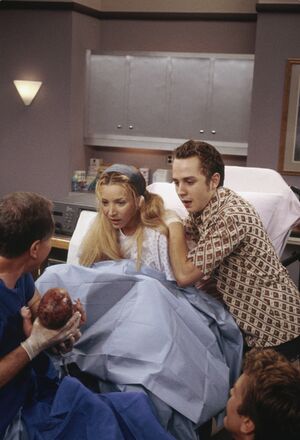 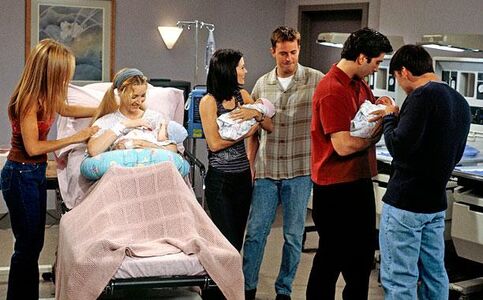 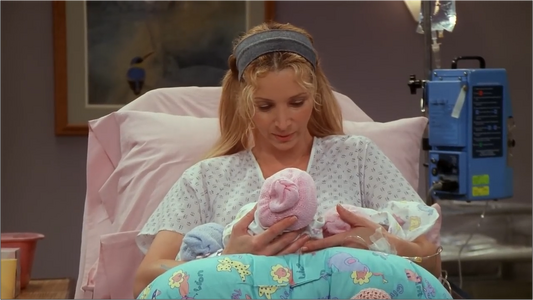 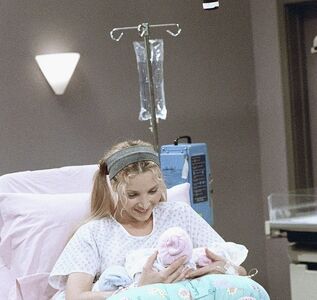 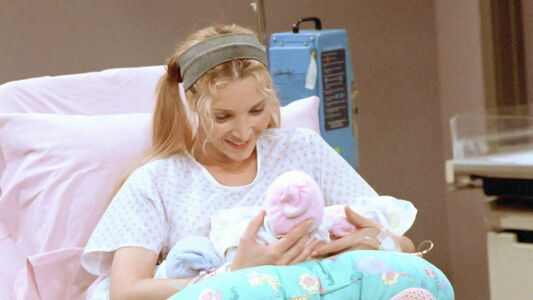 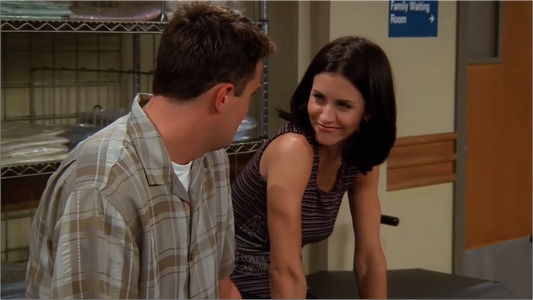 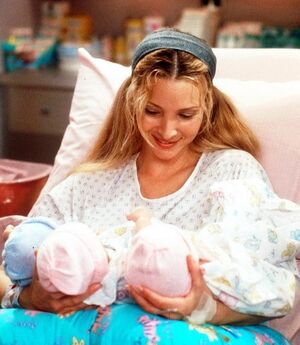 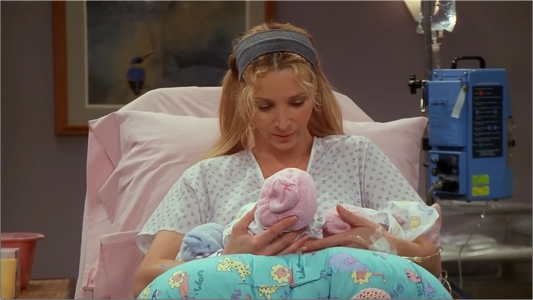