The One Where Everybody Finds Out

View source
watch 03:37
Episode Recap: The One Where Everybody Finds Out
Do you like this video?
Play Sound

"The One Where Everybody Finds Out" (also known as "The One Where Phoebe and Ross find out") is the fourteenth episode of the fifth season of Friends, which aired on February 11, 1999. When Phoebe finds out about the Monica/Chandler affair, she tests Chandler via flirtation. Ugly Naked Guy's apartment goes up for rent and Ross wants it.

The friends learn that Ugly Naked Guy is moving out and Ross tries to get his apartment. While Rachel, Ross and Phoebe are having a look around the apartment, Phoebe looks through the window into Monica's Apartment, and sees Monica and Chandler having sex. Astonished, she starts screaming and Rachel reappears and reveals that she already knows about Monica and Chandler's relationship. She convinces Phoebe to calm down before Ross finds out, knowing that he would be furious and not accept it well, especially with his recent anger issues.

In Central Perk, Rachel and Phoebe tell Joey that Phoebe has found out about Monica and Chandler. Joey is relieved that enough people know that they can finally confront their friends about their relationship, but Phoebe and Rachel decide to mess with them instead, for fun.

Chandler then enters and Phoebe begins flirting with him. She pretends to make it clear that she is attracted to him, and deliberately points her butt in his direction as she leaves.

Later that day, Chandler tells Monica that he thinks Phoebe was hitting on him. Monica laughs and tells him that he is being ridiculous.

In the next scene, Rachel asks Monica if she would like to go and see a movie with her and Phoebe. Monica tells her that she had plans to "do laundry", but she is obviously lying; she just wants to have sex with Chandler in secret. In response, Rachel gives her a large bag of laundry to do, and Phoebe gives her a sack of quarters for the machines at the laundromat, so Monica and Chandler's plans are ruined. As Rachel and Phoebe leave, Phoebe tells Chandler that she will miss him in a seductive voice, and pinches his butt. Monica then realizes that Phoebe truly isn't attracted to Chandler, and that she has actually discovered that they are sleeping together.

Meanwhile, Ross tries to bribe Ugly Naked Guy into giving him his apartment with a basket of mini-muffins, but many other people also want to move in, and give him more extravagant bribes, such as a mountain bike and a pinball machine.

Monica and Chandler decide to interrogate Joey, as he is the only one (that they are aware of) who knows about them. He confirms that both Rachel and Phoebe know. Monica craves revenge, and now wants to mess with Phoebe and Rachel. She persuades Chandler to reciprocate Phoebe's flirtation. Phoebe is bewildered, but soon realizes that Chandler and Monica know that she knows. When Chandler invites her over so that she can "feel his bicep and maybe more", she accepts. This is very distressing to Joey, who just wants to tell them the truth.

Ross, determined to bond with Ugly Naked Guy in order to get the apartment, pays him a visit. He admires his boldness for never putting any clothes on, and ends up getting naked himself and sharing the mini-muffins with him.

Phoebe arrives at Joey and Chandler's for her faux-date with Chandler, unaware that Monica is hiding in the bathroom to advise Chandler on what to do. (Rachel is hiding outside to advise Phoebe on what to do). They start off the date by quickly draining their glasses of wine. Chandler then goes to put on some music, and Phoebe starts dancing sexily for him. She tells him that she wants to take off all her clothes and have him rub lotion on her. Chandler goes to the bathroom, supposedly to get the lotion, but actually to ask Monica what he should do. While he is in there, Phoebe consults Rachel. Joey complains that he wants to sit in his chair, but when Rachel assures him that it will all be over the sooner Phoebe breaks Chandler, he finally decides to play along. He swiftly rips open Phoebe's blouse to reveal her bra because he knows that Chandler is "afraid of bras".

Phoebe and Chandler end up kissing awkwardly, but Chandler then pushes her away and tells her that she wins, as he can't have sex with her. Phoebe triumphantly asks him why, and Chandler blurts out. "Because I'm in love with Monica!"

Phoebe is shocked, and Rachel and Joey rush in from the hallway. Monica emerges from the bathroom, and she and Chandler declare their love for each other in front of their friends. Joey and Rachel are clearly touched, and Phoebe admits that she had simply thought that they were sleeping together; not that they were in love. Joey is thrilled that everything is out in the open, but Chandler and Monica remind him that Ross still doesn't know, and they don't want anyone to tell him, much to Joey's frustration.

After his naked encounter, Ross ends up getting Ugly Naked Guy's apartment. He invites his boss to see the place, hoping to show him that he has changed his ways and is ready to return to work. However, he spots Monica and Chandler having sex through the window, and furiously screams at them in front of his boss. 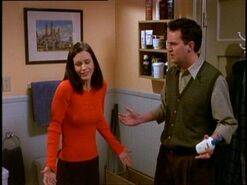 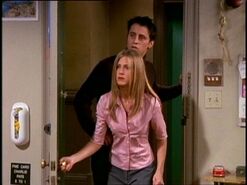 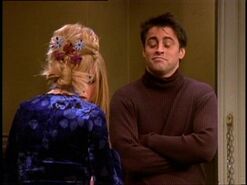 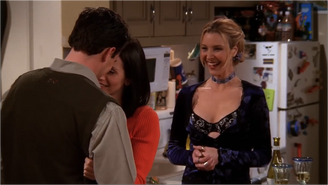 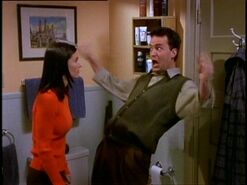 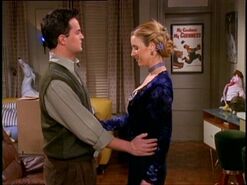 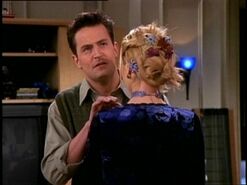 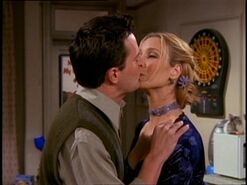 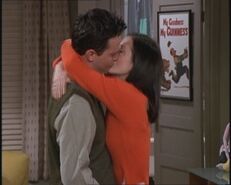 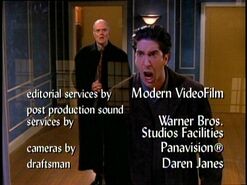 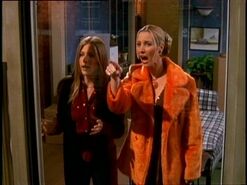 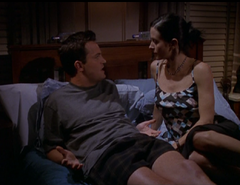 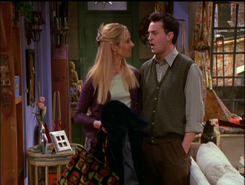 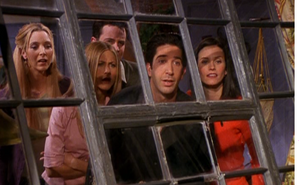 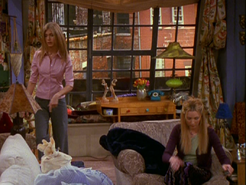 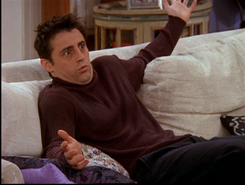