Friends Central
Register
Don't have an account?
Sign In
Advertisement
in: Friends Episodes, Season 6, Episodes with Phoebe's name in the title,
and 2 more

The One Where Phoebe Runs

"The One Where Phoebe Runs" is the seventh episode of the sixth season of Friends, which aired on November 11, 1999.

After Chandler moves in with Monica, Joey finds sexy Janine, a dancer from Australia, as a roommate. She soon takes over his apartment with her belongings. Joey can't flirt with Janine because they live together and it would be too complicated. He is drawn to her and has to find a way to repel her, so he intentionally acts weird in front of her. But Janine tells him that though she finds him nice, she doesn't feel attracted to him anyway.

Chandler decides to clean the apartment as a kind gesture to Monica, only for Ross to point out afterwards that he would need to put everything back exactly how Monica had it or risk incurring her wrath. Being her brother and having lived with her for 16 years, Ross knows only too well how it is to be at the receiving end of her anger. He points out to Chandler that the back of the couch is not exactly aligned with the carpet, something the latter understands only when he sits on it and finds he can't put his feet up on the coffee table. When he calls Monica, who is in a bad mood at work and threatens to kill someone before she comes home, he fears the worst, and somehow manages to keep her out the door by lying that Ross is naked. When she does enter the house later, she is initially peeved, but when she finds out that Chandler put in the effort to arrange the apartment just the way she likes, she forgives him and they embrace.

Rachel and Phoebe go jogging in the park together to bond, now that they are roommates. Phoebe runs like an elephant because she feels it makes running a lot more fun and carefree, but Rachel doesn't want to go jogging with her anymore because she is embarrassing. Rachel pretends to be injured but goes on a jog anyway without Phoebe, angering the latter. She explains to Phoebe that she is conscious about "people with eyes" looking at her, at which Phoebe calls her uptight. Rachel agrees that she needs to loosen up and tries Phoebe's way of running. She feels so free and great doing it that she doesn't care about people staring, until she bumps into a horse and falls.

In the tag scene Ross tells Janine the same thing he'd been telling Chandler at the start of the episode, about computers being able to carry out the same amount of functions as a human brain by 2030. 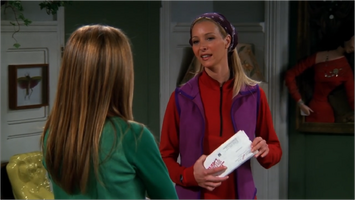 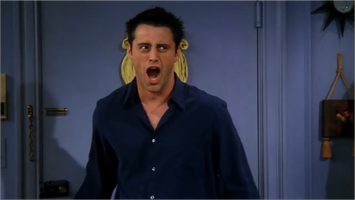 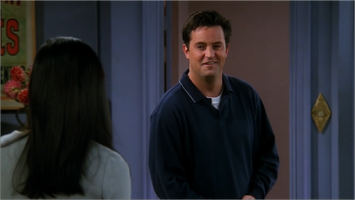