Friends Central
Register
Don't have an account?
Sign In
Advertisement
in: Friends Episodes, Season 1, Episodes with Rachel's name in the title,
and 3 more

"The One Where Rachel Finds Out" is the twenty-fourth episode and season finale of the first season of Friends, which aired on May 18, 1995. Ross travels to China for work, Joey balances sexually-related research and a new girlfriend, and an inadvertent comment by Chandler leads to Rachel learning of Ross' love for her.

Rachel keeps drooling over Ben's baby pictures, unaware that Ross is drooling over her. Chandler and Joey are skeptical that anything can happen between the two and suggest to Ross that he move on and try find someone else.

At Monica's Apartment, the friends are about to hold Rachel's birthday barbecue, to which Joey invites Melanie, a girl who works in the fruit basket gift business. She wants to have sex with him, but Joey can't because he's participating in a research study in which he donates sperm for money in return.

Ross drops by to tell the guys that he's going to China for a week, and leaves Rachel's present with them to give to her. Before eating, Rachel opens her presents, and is pleasantly shocked to find that Ross bought her a very expensive pin that she had pointed out to him a while ago. Chandler tries to play the present down by pointing out how Ross did something similar when he was in love with Carol and bought her an expensive crystal duck, but then realizes he has just told Rachel how Ross feels. She's even more shocked at this, but doesn't know how to react.

Joey keeps postponing sex with Melanie by doing other sexual things that please her only. This makes Melanie even crazier about Joey, and she quite literally fills his and Chandler's apartment with fruit baskets in gratitude. Joey is also having fun pleasing Melanie, which he points out to Chandler is something he doesn't usually do. However, as soon the sperm study ends, he changes his mind and returns to his normal love of sex.

Rachel and the girls discuss the pros and cons of going out with Ross, about which Rachel is still undecided. She leaves things with him at the airport, but as he has already passed through the gates, she can only leave him a message, but the flight representative delivers it to the wrong man. Ross, who's learning Chinese from a Walkman, leaves for China with Rachel's message unknown to him.

Rachel tries to put Ross out of her head by asking a guy named Carl on a date. The date goes horribly wrong - Carl is a self-obsessed bore, and Rachel can't get Ross out of her head. She finally makes up her mind after seeing Ross in a fantasy, and leaves for the airport to see him. Just when he's about to leave the gates, Ross picks up a bag that a girl dropped. She thanks him and gives him a kiss, revealing she is actually Ross' new girlfriend. Unaware of this, Rachel waits for Ross. 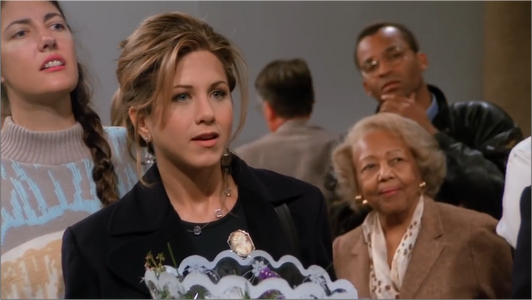 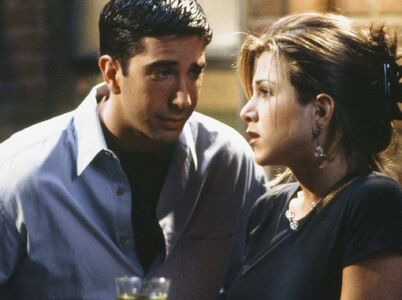