Friends Central
Register
Don't have an account?
Sign In
Advertisement
in: Friends Episodes, Season 5, Episodes with Ross' name in the title,
and 3 more

The One Where Ross Can't Flirt

"The One Where Ross Can't Flirt" is the nineteenth episode of the fifth season of Friends, which aired on April 22, 1999.

Chandler, dressed up for his and Monica's ten-month anniversary, picks up the pizzas that hot delivery girl Caitlin has brought for the group, but Ross mistakes his friend's natural jokes for flirting. Chandler denies this. Ross ends up telling the friends what Chandler did. Phoebe points out that the real reason Ross is mad is because he finds Caitlin attractive, and Ross takes the opportunity to flirt with her when he finds a missing vegetarian pizza that wasn't delivered for Phoebe. Unfortunately, flirting is not his best quality, and this he shows with inappropriate comments he makes to Caitlin and embarrasses himself. Saddened by this, Ross orders yet another pizza, practicing flirting on Phoebe as the pizza is on its way (Phoebe doesn't get that Ross is flirting). Caitlin arrives with the pizza, but Ross screws up the flirting again and ends up talking to her about gas and methane and embarrasses himself again. He scares her so much that she pays for the pizza herself and flees the apartment. Out of pity for Ross, Rachel catches up with her and tries to talk her into going out with Ross. Rachel returns to the apartment and gives Ross Caitlin's phone number.

Meanwhile, Joey introduces everyone to his Italian grandmother, who is deeply intent on seeing her grandson debut on Law & Order. As she doesn't speak a word of English, they find it difficult to communicate with her, except for Phoebe, who manages to offer her a glass of water in Italian. The TV show starts, but Joey finds out that he's cut out of it. Desperate not to kill his grandmother of shock, he records himself on tape at his apartment in a crime scene where he holds his duck hostage. The clip is pretty crude, as he doesn't even change the sweater he's wearing. But the clip is good enough for Nonnie - that is, until the video tape continues rolling, showing Chandler sing Space Oddity in front of the camera.

Monica, who is getting dressed for the big anniversary date, asks Phoebe to return her the earrings Chandler bought her, which Phoebe borrowed some time ago. It turns out, however, that Phoebe lent the same earrings to Rachel, who has lost one of them. Phoebe tells her how the earring are Monica's, which makes Rachel flip out because she's not allowed to borrow Monica's stuff as she ends up losing it. Fearing that Monica will kill her if she finds out, Phoebe takes the blame instead of Rachel, but Monica is understanding with her. Rachel steps in and explains everything to Monica, who immediately loses it with Rachel. Monica ends up wearing another pair of different earrings, which luckily for her, Chandler doesn't notice. Monica and Chandler leave for dinner, and Chandler thanks Ross for the earrings he picked up for Monica. 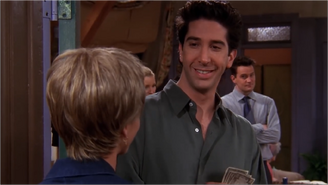 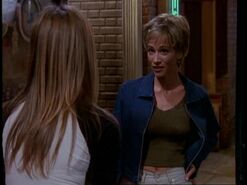