"The One Where Ross Finds Out" is the seventh episode of the second season of Friends, which aired on November 9, 1995.

Chandler is having problems because he's put on weight, so Monica offers to be his personal trainer. Her workout sessions are practically destroying Chandler. He is sticking to the program, but he's mad at Monica for her obsessive routines. With one pound to go, he picks on Monica's weaknesses - no job, no boyfriend, no confessions of anything to her parents - to convince her to lie down on his couch and for him to go back to bed. Meanwhile, Phoebe is going out with Scott, a guy she finds great, but is frustrated with him because he won't put out with her. After talking to him, she convinces him to have sex with Phoebe, but when talking it out to Joey, she ends up shocked with herself when she realizes what she's done. She realizes this when Joey's reaction to their discussion is: "This man is my god!"

Rachel is finding it hard to forget her feelings for Ross. Monica sets her up on a date with Michael. When Ross and Julie tell the group that they're getting a cat together, Rachel simply freaks out knowing this is a sign the two are serious about their relationship and leaves work in the middle of the day. At the restaurant, Rachel is not listening to a word of Michael's, and instead keeps asking him about cats and how she finds it weird that Ross is getting one while gulping down endless glasses of wine. Michael is understanding, having just gone through a divorce, and tells her what she needs to get over Ross is closure. Now very drunk, Rachel calls Ross there and then, leaving him a message saying that she's over him.

Ross comes for Monica's old cat toys at Rachel's apartment, checking for phone messages in the process. He happens to hear Rachel's drunken message from the night before. Rachel tries to stop him from hearing it, but fails. Ross finally learns of Rachel's feelings for him, but doesn't know how to respond as Julie is waiting downstairs so they can go and get their cat. Julie rings the doorbell, and he quickly departs, leaving Rachel alone and without an answer. Later that night, as the coffeehouse is closing, Ross comes in and tells Rachel how he didn't get a cat. He's mad at her for revealing her feelings, while Rachel is mad at him for not talking about his crush before. Ross storms out and Rachel locks the door, furious with herself at what she has done. Ross, however, doesn't go far away and returns to the door looking at her. When she gets up, she sees him and unlocks the door. Ross enters, grabs Rachel and they kiss passionately. 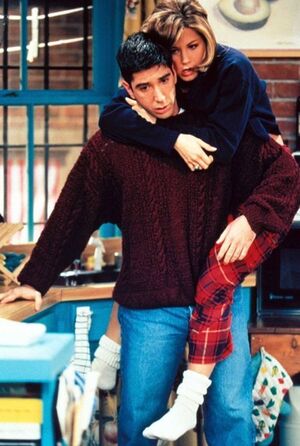 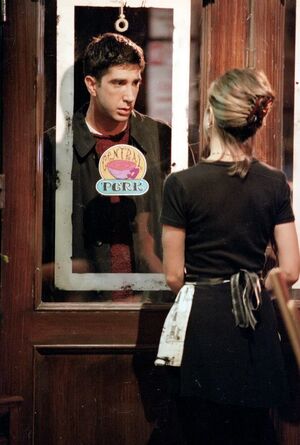 Retrieved from "https://friends.fandom.com/wiki/The_One_Where_Ross_Finds_Out?oldid=87666"
Community content is available under CC-BY-SA unless otherwise noted.