Friends Central
Register
Don't have an account?
Sign In
Advertisement
in: Friends Episodes, Season 6, Episodes with Ross' name in the title,
and 4 more

View source
watch 02:20
Episode Recap: The One Where Ross Got High
Do you like this video?
Play Sound

The One With Ross' Teeth

The One With The Routine

"The One Where Ross Got High" is the ninth episode of the sixth season of Friends, which aired on November 25, 1999. Monica hosts Thanksgiving and Chandler uses the occasion to try and win her parents over. The episode involves a subplot where Rachel makes a trifle including a layer of beef.

It was written by Greg Malins and directed by Kevin S. Bright. It guest starred Elliott Gould as Jack Geller, Christina Pickles as Judy Geller, and Elle Macpherson as Janine Lecroix.

The Geller parents are coming over for Thanksgiving, but they don't know that Chandler and Monica are living together, or even dating for that matter. Chandler tries to charm the Gellers to get them to like him so that they can tell them the truth, but it's clear their dislike of him is deeply ingrained. Monica tells Rachel she can make the dessert this year, but the cookbook pages are stuck together and Rachel ends up making something that is half trifle half shepherd's pie. It comprises layers of ladyfingers, jam, custard, raspberries, more ladyfingers, beef sautéed with peas and onions, a little more custard, bananas, then whipped cream.

Ross finally figures out why the Jack and Judy don't like Chandler: When a compliment on Judy's new sweater results in him calling it tight and then stuttering, Jack asks Judy what's wrong with Chandler, Judy says "I think he's stoned again.", which puzzles Monica and Chandler. Ross knowing what his mother meant pulls Chandler aside and explains what she said: in college Ross smoked pot in the dorm room and when his parents walked in, he blamed it on Chandler. Monica comes in saying her parents were wondering if Chandler was trying to get Ross stoned and Chandler explains what Ross did.

Joey and Ross are also invited to spend Thanksgiving with Janine, Joey's roommate, and her hot dancer friends, but the girls make them stay. Ross tries to avoid telling his parents about getting high, forcing Monica to tell them. Furious at his sister, he finally tells his parents that it wasn't Chandler. Monica and Ross take this opportunity to yell out secrets about each other they have wanted to say, including Ross being fired from the museum then marrying Rachel and getting divorced a third time, but only after Ross reveals that Monica and Chandler are living together. This results in Phoebe admitting to being in love with Jacques Cousteau (after a dream she had earlier, although another dream saw her fantasizing about Jack); Rachel realizes she wasn't supposed to put beef in the trifle, and Joey says he just wants to leave. Judy takes a moment to process the preceding 30 seconds and deals with everyone in order: she tells Joey that he can leave, tells Rachel that the trifle wasn't supposed to have meat in it, informs Phoebe that Jacques Cousteau is dead, and tells Monica she didn't need to hide that she was in such an important relationship. Then Judy and Jack ask Ross about his recent bad behavior. When it comes to Chandler, they call him a wonderful human being for having been Ross' best friend through three divorces and a drug problem and express their appreciation that he's taken on Monica as well, much to his relief. They then narrow their focus back onto Ross and Monica, with Jack saying he doesn't know what to do with them. Chandler says he'll talk to them.

Monica: Dad, you know that mailman you got fired? He didn't steal your Playboys, Ross did.
Ross: Yea, well Hurricane Gloria didn't break the porch swing, Monica did.
Monica: Ross hasn't worked at the museum for a year.
Ross: Monica and Chandler are living together!
Monica: Ross married Rachel in Vegas, and got divorced, AGAIN!
Phoebe: I love Jacques Cousteau!
Rachel: I wasn't supposed to put beef in the trifle!
Joey: I wanna gooooo!
Judy: That's a lot of information to get in thirty seconds. All right, Joey, if you wanna leave, just leave. Rachel, no, you weren't supposed to put beef in the trifle. It did not taste good. Phoebe, I'm sorry, but I think Jacques Cousteau is dead. Monica, why you felt you had to hide the fact that you're in an important relationship is beyond me.
Jack: And we kinda figured about the porch swing.

Rachel: Joey, what is wrong with your apartment? It's like a hundred degrees in there.
Joey: Did it make you want to walk around in your underwear?
Rachel: No.
Joey: Still not hot enough!

Ross: What is with everyone today? It's Thanksgiving not truth day! 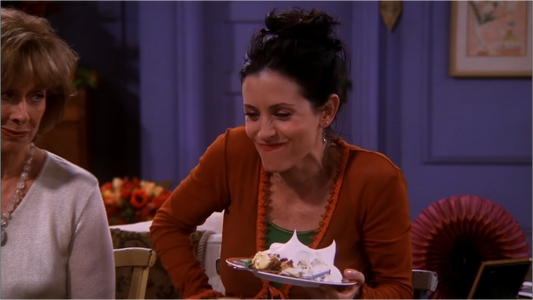 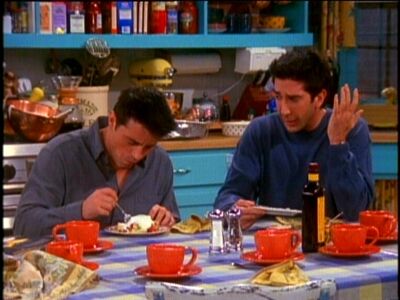 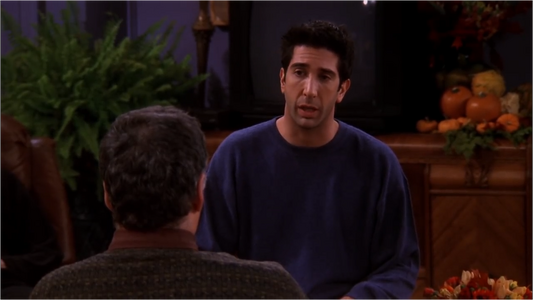