Friends Central
Register
Don't have an account?
Sign In
Advertisement
in: Friends Episodes, Season 10, Episodes with Ross' name in the title,
and 2 more

The One Where Ross Is Fine

The One Where Ross Is Fine

The One After Joey And Rachel Kiss

The One With Ross' Tan

"The One Where Ross Is Fine" is the second episode of the tenth season of Friends, which aired on October 2, 2003.

Ross deals with finding out about Rachel and Joey's relationship almost as well as when he found out about Monica and Chandler - that is, not well at all - but out of loyalty and embarrassment, maintains that he is totally 'fine'. The only problem is that everyone can see through his ruse: the word "fine" keeps coming out all high-pitched and squeaky.

In an attempt to prove that he is completely 'fine' with the new relationship, Ross invites Rachel and Joey to a dinner party with him and Charlie. Before dinner, however, Ross is obviously tense and anxious, almost on the verge of tears. When Joey suggests a drink to calm Ross' nerves, the latter quickly goes overboard, becoming so drunk that he forgets to use oven mitts to carry a steaming dish of fajitas to the table – not even noticing the pain in his hands until Rachel points out his mistake. After a while of this drunken inappropriateness, Rachel and Charlie go home, while Joey decides to stay in order to keep an eye on Ross. In the morning, the two men talk, and Ross finally admits he is not fine but wants to be. He promises to try and get used to Joey and Rachel being together.

Meanwhile, Frank Jr., Phoebe's half-brother, comes into town with his kids to visit them. He is completely wrung out and exhausted, claiming that he "hasn't slept in four years", and the triplets are running around making complete troublemakers of themselves in the coffeehouse. He wants Phoebe to take one of them to live with her so that he can manage the other two, but upon closer inspection of which one, he realizes that he loves them all too much to let any of them go. Phoebe understands the position he and Alice are in and explains to Frank that she'll always be available for baby-sitting should the need arise.

During this family reunion, Monica and Chandler away from the others meeting Phoebe's friends Bill and Colleen to learn about the particulars of adoption: they adopted their son Owen at birth and know a lot about the process. All goes well, to the point that Monica and Chandler are gaining a lot of knowledge – until Chandler runs into Owen on the way to the bathroom, mentioning Bill and Colleen's help in explaining "how they adopted you", only to find that Owen knew nothing about his adoption. Panicking, Chandler tells Monica what he's done and the two attempt to make a hasty exit – but don't manage to get out before Owen tells his parents about Chandler's 'big reveal'. The boy is completely distraught, but seems even more upset after, in the middle of a rant at Bill and Colleen, Chandler suggests that Santa isn't real. And then, to top it all off, back at the coffeehouse, Chandler manages to tell the triplets Phoebe gave birth to them. At this point, he decides to just go and tell Emma she was an accident. 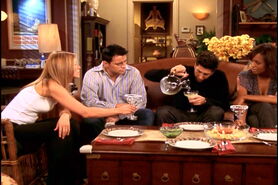 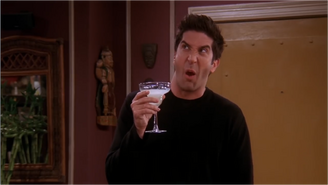