The One With The Girl From Poughkeepsie

"The One Where They're Going To Party" is the ninth episode of the fourth season of Friends, which aired on December 11, 1997.

Phoebe and Monica get a van for their catering business. Monica writes her first review of a restaurant and Allesandro, its owner, comes to her home to complain about it. In response, she shows him how to make a sauce. Impressed, he wants her as head chef of the restaurant. Monica compiles a list of all the things Phoebe could do with her vehicle but Phoebe is really upset because Monica will leave their business. Still, she lets Monica take the job because that's all Monica ever dreamed of. Unfortunately for Monica, the restaurant chefs hate her because Emilio, who was their father, had to be fired for her to come.

Rachel applies for a job as assistant buyer. Joanna doesn't want to lose a good assistant as Rachel and makes Rachel look bad at the interview for the new job. Rachel is ready to quit but Joanna offers to create the position of assistant buyer for her within the department, which will include a raise, her own office and an expense account. However, Joanna is hit by a speeding cab and dies before she can put through any paperwork regarding Rachel's promotion. Rachel is devastated the next day for not getting the promotion. Joanna's other assistant Sophie, however, is elated at Joanna's death because she always belittled and ridiculed her.

Gandalf, an old friend and party wizard, wants to visit Ross and Chandler. They are excited like two small children and can hardly sit still, but then unexpectedly Gandalf cancels their reunion. Ross and Chandler are depressed because they wanted to party with their friend, so Joey offers to take them to a few nightclubs. After a while, however, they realize that they are in their late twenties and cannot withstand so much partying like they used to many years before.

Phoebe: Ooh! I gotta go. I found a guy who can fix up the van for catering.
Monica: Oh, do you want me to go with you?
Phoebe: No, no, it's okay, but are you SURE we don't want the waterbed? 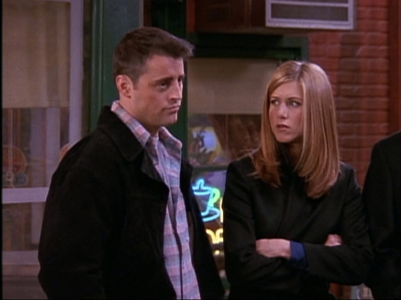 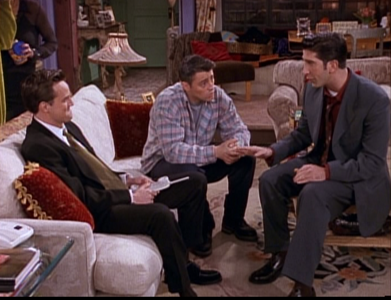 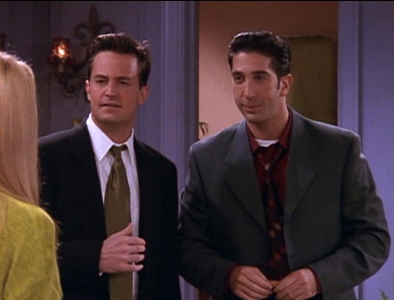 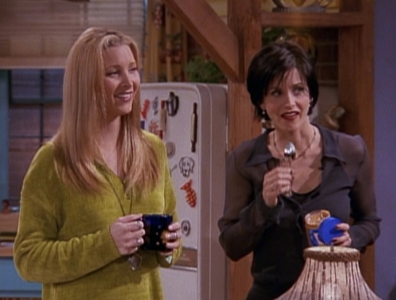