The One With All The Cheesecakes

The One With All The Cheesecake

The One With The Holiday Armadillo

The One Where They're Up All Night

"The One With All The Cheesecakes" is the eleventh episode of the seventh season of Friends, which aired on NBC on January 4, 2001. Phoebe's old flame, David, visits from Minsk for an evening of romance. Rachel and Chandler swipe deliveries of a particularly tasty cheesecake from their neighbor's doorstep.

Rachel sees Chandler eating a cheesecake that was, accidentally, delivered to their door, and so he lets her taste it. This cheesecake, from Mama's Little Bakery, is, in fact, the best cheesecake they've both ever tasted. When they later discover that another cheesecake is delivered, they decide to drop it off at the right door, but when they find it, still untouched, in front of that same door later that day, they take it. Chandler busts Rachel eating off the cheesecake while he wasn't there, which starts a small fight between them. This fight results in the cheesecake falling to the floor in the hallway, but since it's so incredibly yummy, they can't resist eating it right off the floor.

A cousin of Ross and Monica is getting married. Ross is invited to the wedding, yet Monica is not. Since Ross gets to bring a date, Monica makes him bring her, so she can confront the bride about not inviting her. As she confronts the bride and her cousin, she gets to know that the groom is one of her former boyfriends, which is the reason for her not being invited.

Joey and Phoebe have made plans together, but Joey cancels because he's going on a date. This hurts Phoebe's feelings, and she holds a speech about how important friendship is, and how you do not ditch your plans with your friends for a date. Getting to know that he hurt Phoebe's feelings, Joey starts feeling really bad, and they agree to have dinner the following night. Though, Phoebe meets her former boyfriend, David, whom tells her how he's only in town for one night. When David wants to go to dinner with her, it causes a moral dilemma for her about doing to Joey what he did to her, and decides to rush through dinner with Joey and meet David for drinks at 9:00 PM. Joey eventually figures things out and tries to detain her during dinner but Phoebe realizes that David might be the love of her life and storms out to meet him. After a tearful goodbye at the end of the evening, Joey shows up and offers her a shoulder to cry on. 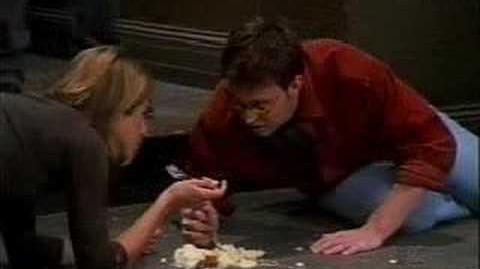