View source
watch 01:01
Episode Recap: The One With All The Thanksgivings
Do you like this video?
Play Sound

The One Where Ross Moves In

Ross's complaint that his divorce and eviction means he is having the worst Thanksgiving ever prompts the others to tell their stories of bad holidays that they had gone by before. Chandler reminds everyone of the Thanksgiving where his parents told him they were getting a divorce. Phoebe then tells of a worse one from a past life where she lost an arm, though Ross disqualifies her story, limiting the tales to true lives. Rachel says she knows Monica's worst Thanksgiving, but Phoebe interrupts with a story about the Thanksgiving when Joey got a turkey stuck on his head. Joey intended to freak Chandler out with the turkey, so Phoebe, and later Monica, after she comes home, attempt to pull the turkey out. This results in Chandler being scared when he returns. Monica then tells the group what she thinks is her worst Thanksgiving. In 1987, Rachel, who has a big nose, comes over, upset about Chip Matthews dumping her for Nancy Branson. Ross brings Chandler home from college for Thanksgiving (with Ross having his Afro and Mustache and Chandler with a "Flock Of Seagulls" Hair Style). Rachel tells Monica, who is overweight, that she is through dating high school boys and wants to date men. Ross overhears this and tells Chandler that he is thinking of asking Rachel out and tells Chandler his plan. But, hearing it might be all night and Ross offers to let him stay at his house, Chandler blurts out that he doesn't want to be around his 'fat' sister, which was overheard by Monica. Disgusted that he actually meant that, Monica stops overeating.

Back in the present, Chandler apologies to Monica for insulting her. Rachel reveals that story is not the story she was referring to. The flashbacks continue to 1988; Ross and Chandler (this time dressed like members of Miami Vice) arrive for dinner to find Monica has slimmed down, and Chandler now finds her attractive. Monica tells Rachel that she wants to humiliate Chandler for calling her fat, so Rachel suggests tricking him into taking off his clothes. Based on Rachel's suggestion that she act like everything around her turns her on, Monica tries

to seduce Chandler by rubbing various objects, including a knife, against herself. She accidentally drops the knife and severs his toe, due to the fact Chandler's shoes are very weak. He is rushed to hospital to have it reattached but, in the commotion, Monica unknowingly mixed up the digit with a small piece of carrot. In the present, Chandler becomes upset after learning that he had lost his toe because he called Monica fat, and angrily leaves. When Monica comes by his apartment seeking his forgiveness by putting a turkey on her head, puts a fez hat and large glasses on it, and dances for him, making him inadvertently tell her he loves her for the first time in their relationship. And the turkey on Monica's head freaks Joey out. A tag scene shows another of Phoebe's past life memories as she serves in a World War I field hospital in 1915, and again loses her arm.

Entertainment Weekly rates the episode "B+", calling the "pre-nose job" Rachel and "Fat Monica" great sight gags and citing Joey's line "It's not so much an underpant as it is a feat of engineering" (in reference to a thong) as the best of the episode. The authors of Friends Like Us: The Unofficial Guide to Friends write "This unusual episode is one of the series' best ever, with the non-stop comedy roller-coaster suddenly throwing a brilliant surprise ending at you".

The dates of the flashbacks in this episode create many continuity errors that do not correspond to the rest of the series. 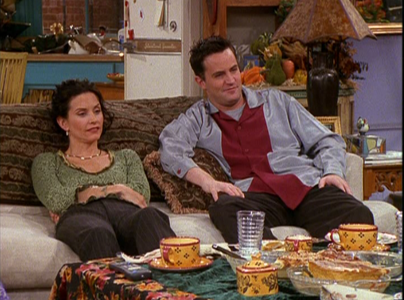 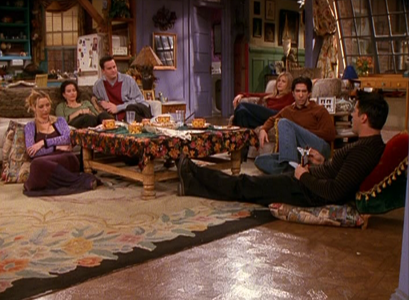 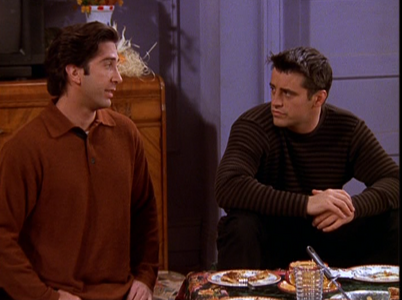 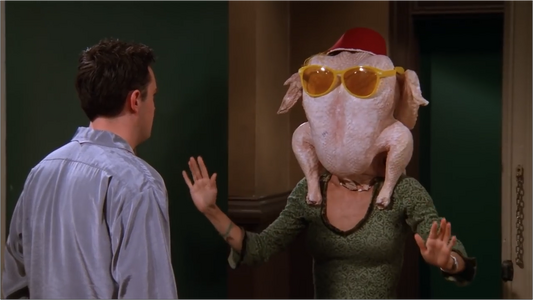 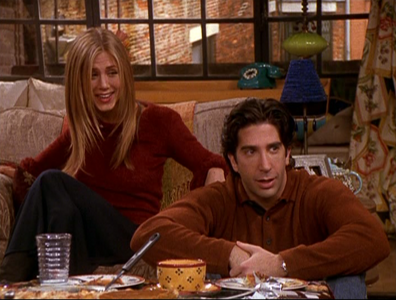 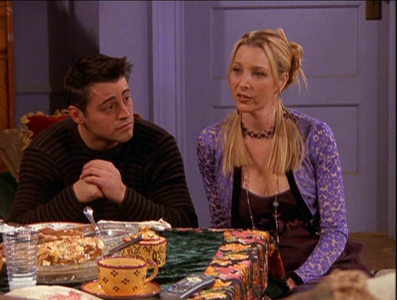