The One With All The Wedding Dresses

The One With All The Wedding Dresses

The One With All The Haste

The One With The Invitation

"The One With All The Wedding Dresses" is the twentieth episode of the fourth season of Friends, which aired on NBC on April 16, 1998.

Joey is snoring so loudly it wakes up Chandler who is sleeping in the other room. Chandler tries to wake Joey up by repeatedly saying his name, only to have Joey repeatedly say his name as well but in his sleep, but then resumes his snoring again. Finally, Chandler wakes Joey up by slamming the door and saying "Oh, did I wake you?".

As Chandler gets another cup of coffee, he attempts to talk to Gunther, who then replies that Chandler doesn't need to fill the silences. Chandler tells the group that he's drinking so much coffee because Joey has started snoring and it's so loud that he can't sleep. Chandler wants Joey to go to a sleep clinic, but Joey doesn't want to go to one. Joey believes that he doesn't have a problem and that Chandler's just being a baby. Monica suggests that next time Joey starts to snore, to just roll him over. Ross then comes in and asks if anyone has seen Rachel. Monica complains that Rachel is upstairs "not doing the dishes". Ross then asks Monica if she can pick up this dress that Emily really wants, but can't get in London. Chandler then comments that Ross is whipped or "wah-pah!".

Rachel is upstairs reading a magazine instead of doing the dishes. However, she hears a noise and runs to the sink to start doing the dishes, as she thinks it's Monica coming home. After she realizes it's Ross, she stops. He talks to her about the engagement and says that he thinks that it will happen for her too. Rachel says that her and Joshua are right there too and that their relationship was pretty serious. Ross says he has to go to work and turns to leave, but before he does he asks Rachel if she wants to go on a double date with him and Emily. She agrees and he leaves.

Monica goes to pick up Emily's dress and the owner mistakes her for Emily and asks her if she'd like to try the dress on. Monica agrees and tries it on. Monica is standing in front of the mirror in the dress when the owner comes to tell her that she has to close up the store. She also asks for her ring back because Monica borrowed it to put on her ring finger. Joey is snoring again so Chandler tries to roll him over only to discover that Joey is not wearing any underwear. He tells him that he has to go to a clinic, and a pajama store.

Joey is complaining because he has to stay up all night before he goes to the sleep clinic even though it is only six o'clock. Rachel comes over to get something from the fridge and the guys comment that they are glad that Rachel is going on a double date and that she is handling it really well. She dismisses them and says that she'd only have a problem if it wasn't for her relationship with Joshua. (After all, she likes him a lot, her and Ross' relationship ended a year ago and it wasn't a pleasant breakup for either of them.) Rachel thinks that Ross and Emily aren't even going to get married. Ross comes in and says that they have picked a date for the wedding and that it will be in four weeks. The place that Emily wants to get married in is going to be torn down, so they decide to get married before it can be.

Rachel meets Joshua at Central Perk and tells him that she thinks that they aren't crazy enough and that they should get married. He freaks out because he's in the middle of a divorce and tells her no. Gunther then yells at him "You idiot". Joey and Chandler are at the sleep clinic. The woman is asking Joey some questions about the preparation for the sleep study when he falls asleep and starts to snore. Chandler sees a really pretty girl come in and sit down. He tells Joey who agrees but then falls back asleep. Joey then starts to hit on the entire room by yelling out "How you doin?". Chandler leaves Joey to sleep and goes over to the girl. He introduces himself and sits down next to her. He learns that she talks in her sleep to which he replies that he "listens" in his sleep. Joey, still sleeping, again comes on to the entire room.

Monica throws a bouquet of fake flowers to Phoebe. Then Phoebe throws the bouquet of flowers to Monica. Then Monica thinks that they have lost it and that it would be a good idea to take off the dresses, but then adds "in like a half an hour?". Phoebe and Monica are in Central Perk and Phoebe says that she hates wearing her regular clothes now. Monica says that it was fun for a while, but then she felt kind of silly. She then crosses her legs and Phoebe sees a garter on her leg. Chandler comes in with news that Joey is going to stop snoring and that Chandler got a date with the woman he met there. The girls ask how that could have happened when he tells them that he got the date because Joey was asleep. Joey comes in wearing a mouth guard so he'll stop snoring. Monica says that he doesn't have to wear it right now because he's not asleep, but Joey says that he wants to wear it because it tastes good.

Rachel calls Joshua to try and convince him that she doesn't want to get married, but she only gets his machine. Rachel realizes that she's upset over Ross' marriage because they've been off again, on again, and she was expecting them to be on again. Ross comes in and tells Rachel that he's got reservations for that date. Rachel tells him that the reservation will only have to be for three because Joshua won't be there. Rachel thinks that Joshua may have broken up with her and that he scares easy. Ross hugs her and then goes to go pick up Emily. Phoebe tells Rachel that she knows what will cheer her up. The scene switches to Rachel, Monica, and Phoebe all wearing wedding dresses. Rachel says that it does make her feel better. Someone knocks at the door and the girls think it's Chandler. Rachel goes to open the door and yells "I do" to scare Chandler. Only it's Joshua at the door, not Chandler. He sees her in the wedding dress and thinking she won't take "no" for answer runs off. She closes the door saying "Yeah, well, that ought to do it".

Chandler is in bed with his date who is talking in her sleep. He hugs her closer when she starts to scream. Joey opens the door and yells through his mouth guard "Dude! I am trying to sleep!" 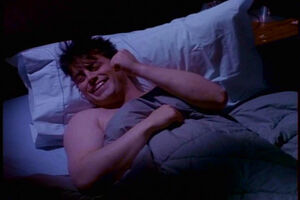 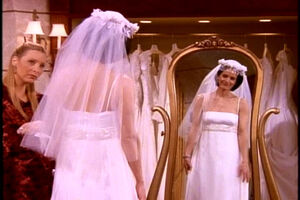 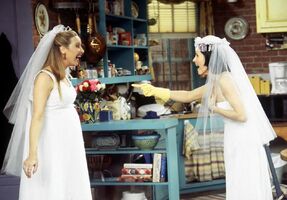 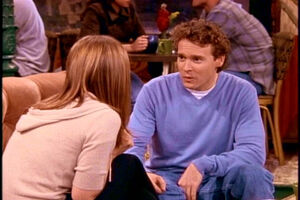 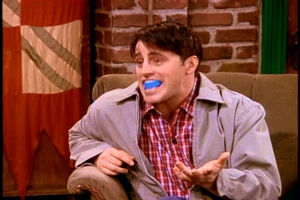 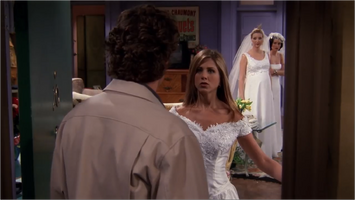 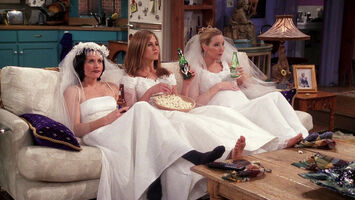 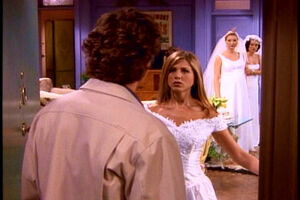 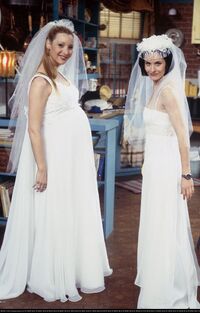