The One With George Stephanopoulos

The One With George Stephanopoulos

The One With The East German Laundry Detergent

"The One With George Stephanopoulos" is the fourth episode of Friends. It premiered on October 13, 1994. It was written by Alexa Junge and directed by James Burrows.

Ross and Monica notice that Phoebe has fallen asleep on the couch in Central Perk. Phoebe wakes up and explains that she didn't get any sleep last night, as her grandmother's boyfriend was staying over. Apparently, they're both deaf and insecure in bed, so they kept her up all night. Monica offers to let her sleep over, and Phoebe accepts.

Chandler and Joey enter the coffee house and greet Ross with tickets to that night's Rangers and Penguins hockey game. They pretend that the tickets are a birthday present, but Ross remarks that his birthday was seven months ago, realizing they had three tickets and could not decide on which one got to bring a date. Ross, looking at the tickets, then realizes that it is the anniversary of when he and Carol first slept together. He becomes depressed and tells the guys that he won't attend the game, opting to spend the night thinking about his ex-wife and her lesbian lover. Ross is about to go home, but Joey is able to convince Ross to attend the game by promising that they will buy him a big foam finger for him to wear.

Rachel comes over, excited after receiving her first-ever paycheck. However, her excitement is short-lived when she discovers that she has earned very little after taxes. Her friends try to cheer her up, saying that they are good earnings for a first job and that she will easily be able to live off of them. There is a pause, and they try to not-so-subtly help her by tipping generously. The guys leave for the hockey game. Leslie, Joanne, and Kiki, Rachel's old friends from Long Island, enter the coffee house. The four women reunite by hugging each other, screaming, and jumping up and down. Rachel's old friends are shocked to see her working; Joanne comments on how her waitress' apron makes her look like she is in a play. Rachel becomes wistful as she notices how heavily pregnant Leslie is, how thin and glamorous Kiki is, and when Joanne reveals that her father has made her a partner in his firm. They all scream excitedly again, and Kiki shows off her huge engagement ring. Phoebe and Monica are slightly startled by this side to Rachel, and they mock her and her old friends.

The guys walk to Madison Square Garden for the hockey game. Ross keeps noticing things that remind him of Carol, and it begins to annoy Joey and Chandler. At the game, Ross continues to reminisce. However, the game begins, and Ross starts to forget about Carol and root vigorously for the Rangers. All three guys are having a great time, until Ross is hit in the face with the hockey puck and they are forced to head to the emergency room. Back at Central Perk, Rachel wants to hear all of the gossip from back home. Kiki tells her that everyone is still talking about how she left Barry at the altar. This makes Rachel feel uncomfortable, so Joanne changes the subject by asking her when she is coming back home. Rachel laughs and tries to clarify that she is staying in the city for good. Her friends clearly disapprove, convinced that she would rather be an effortlessly rich Long Island girl back home.

In the hospital waiting area, Ross waits to be seen. A tense Chandler approaches the snippy receptionist, Nurse Sizemore, to inform her they have been waiting for over an hour. However, she shuts the glass panel on him, so Chandler talks into the glass instead. Ross reveals that he actually lost his virginity to Carol, so he has only ever been with one woman. This comes as a shock to his friends, and Joey mentions how hockey was the wrong idea. Eventually, Ross finally gets to see a doctor, while Joey and Chandler discuss the fact that Ross has only ever been with one woman. Chandler starts off by saying that he thinks it is sweet and romantic, but he then admits that he thinks Ross is a freak. Ross returns to the waiting room with a piece of steel bandaged to his nose. The receptionist looks at him and laughs at how unattractive he looks. Ross wants the hockey puck as a souvenir, but a bratty child in the waiting area has it. Ross asks to have it back but the kid refuses. Ross tries to snatch it away, but it flies out of his grasp and knocks the receptionist out, which finally puts a smile on his face.

Back at the apartment, Monica and Phoebe are preparing for their slumber party. Rachel enters, and starts drinking "Tiki Death Punch" straight from the blender after learning that it contains rum. The phone rings - it is Rachel's credit card company. Apparently, they have noticed some unusual activity on her account: she hasn't used her card for weeks. This sets Rachel off on a rant about her low income, her old friends' success and happiness, and how her life is falling apart in general. Monica and Phoebe try to her cheer up. None of their efforts work, and instead, Rachel manages to depress them, too. Monica eats a bowl of cookie dough and Phoebe drinks "Tiki Death Punch". Rachel apologizes for bringing them down with her, and answers the door as their pizza has arrived. She learns the delivery boy has brought them the wrong pizza; the one that he has brought was meant for George Stephanopoulos. Hearing this, Monica leaps up from the couch and runs to the door. The girls begin to swoon over President Clinton's gorgeous press secretary.

They take the pizza and head to the balcony with binoculars, hoping to see George. They spy on George and his date. The lights go out and they assume that the couple has gone to have sex. The girls get drunk and start telling secrets. Monica announces that a vegetable pâté that she had once made for Phoebe, a vegetarian, was actually made from goose. Phoebe is disgusted and triumphantly tells Monica that she doesn't feel bad about sleeping with a guy a couple of hours after he and Monica had broken up. This upsets Monica, but Rachel takes it further by revealing that the valentine that she received from a boy was actually from her. She tells Phoebe that Monica was overweight when they were young. Monica retaliates by announcing that Rachel once peed her pants in seventh grade while she was laughing. Rachel and Monica start squabbling, but Phoebe stops them by spotting George through the binoculars. The girls beg him to drop his towel, and they are very happy when he does.

In the closing credits, Joey and the girls are playing Twister. The credit card company calls Rachel again, so Chandler takes her place in the game so that she can speak to them. When asked about her not using her card in a while, Rachel tells them that she is fine, and saying it out loud finally makes her confident in her independence. 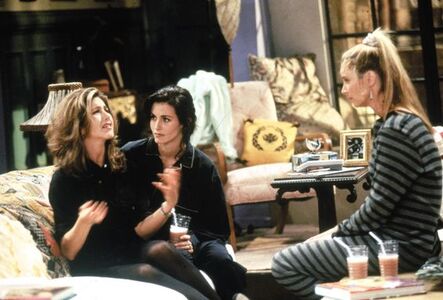 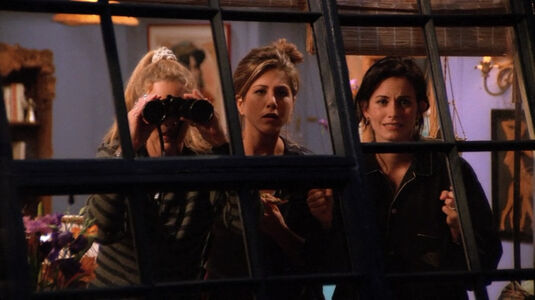 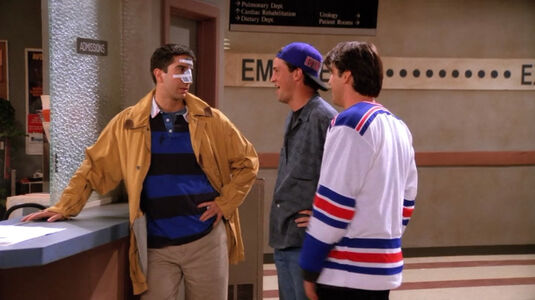