Friends Central
Register
Don't have an account?
Sign In
Advertisement
in: Friends Episodes, Episodes with Joey's name in the title, Friends,
and 3 more

The One With The Ballroom Dancing

The One With The Dirty Girl
"The One With Joey's New Girlfriend" is the fifth episode of the fourth season of Friends, which aired on October 30, 1997.

When Ross gets Amanda's phone number, he shows it off in front of Rachel, hoping to make her feel jealous. She doesn't stand this, until Chandler blows Ross off by revealing to Rachel that he hasn't even kissed his date the one time that they went out. To get back at Ross, Rachel hooks up with Josh, a college soccer player. A real dating war starts between Ross and Rachel, but the two have clearly chosen the wrong dates to go out with - Amanda makes Ross babysit her son to go out with a man she's been crazy about, (Ross plots his revenge by saying he'll make lots of long-distance phone calls), while Josh turns out to be stealing from Rachel and Monica. Only when Monica points out everything to each other do the two realize that they are both petty to descend to such levels.

Meanwhile, poor and unemployed Phoebe needs her singing at Central Perk to keep her spirits up during this difficult time, when, to cap matters, she also catches a cold. When she projects her first notes on the microphone, she falls in love with her new, sick, sexy voice. However, the new voice doesn't last long when she heals from her cold. When Monica catches a cold too, Phoebe accuses her of stealing it and does anything in her power to get her cold back, including stealing Monica's cold-covered napkins and licking her half-finished noodle soup, but this does nothing for her. When she catches Gunther sneezing at the coffeehouse, Phoebe kisses him fully on the mouth, which gives her a cold and a sexy voice again.

Chandler meets a woman called Kathy at Central Perk and feels an instant undeniable attraction. Unluckily for him, Kathy turns out to be waiting for a date, who enters the coffee house at that very moment. Chandler turns around to see that her date is Joey. That same night, he runs into Kathy while watching Ernie Kovacs reruns. He apologizes to her for hitting on her, and shows her a Wonder-Mop he has bought from a TV ad, which Kathy finds cool. Only the next day at Central Perk do the friends realize from his words that there might be something more than friendship that he wants with her. Chandler is in deep denial about this, but when he crosses half the city just to say 'hey' to Kathy when he sees her jogging, he starts to doubt his denial. Unfortunately, when Chandler admits his crush to the rest of the group (excluding Joey), it seems that no one can comfort him about this. When he watches TV in the living room (Joey and Kathy seem to be 'busy') he raises the volume so as not to hear his friend and date, but when this annoys Joey, he can't take any more of it and goes crashing on Monica's couch.

At the end of the episode, Gunther apologizes to Rachel for kissing Phoebe on the lips. Thoroughly confused, Rachel forgives him.

Monica (sneezes): Phoebe, I think I caught your cold.
Phoebe: You mean you stole it!

Joey: I made an effort to like Janice. Now I think it's your turn to make an effort to like Kathy by coming out to dinner with us. Right?
Chandler: Yeah, right.
Joey: Good. And hey, my treat. But, that's only because you're not eating anything, right? 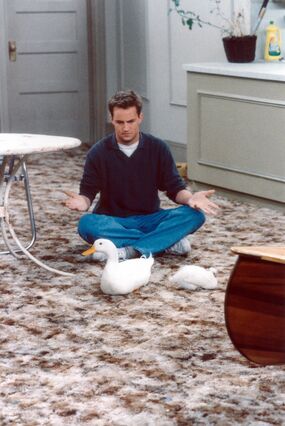 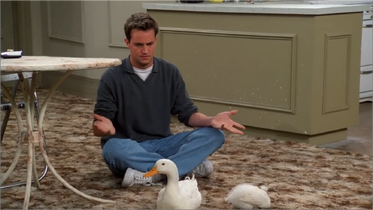 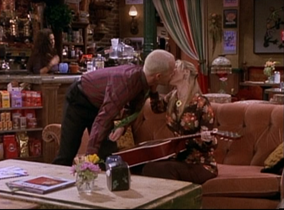 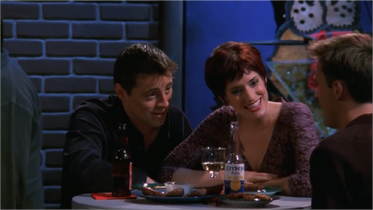 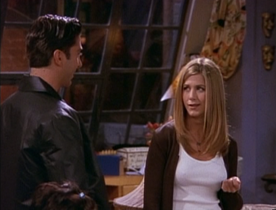