Friends Central
Register
Don't have an account?
Sign In
Advertisement
in: Friends Episodes, Season 10, Episodes with Phoebe's name in the title,
and 4 more

The One With Phoebe's Wedding

The One With Phoebe's Wedding

The One Where The Stripper Cries

The One Where Joey Speaks French
"The One With Phoebe's Wedding" is the twelfth episode of the tenth season of Friends, which aired on February 12, 2004.

Prior to the rehearsal dinner, Phoebe has a problem finding somebody to walk her down the aisle - her stepdad was going to get day release from prison to do it, but he ends up stabbing another inmate in the exercise yard and has to miss the ceremony. Phoebe asks Joey if he'll take her stepdad's place, and he accepts. As a result, Joey acts if he's Phoebe's father and asks Mike for his intentions.

At the rehearsal dinner, Phoebe gets really upset with Monica for rushing her and making sure everything is spotlessly perfect even if no one likes it. It eventually gets to the point where she forces her to skip through parts of her toast. This causes Phoebe to meet her snapping point and fire Monica out of anger. The next day, Phoebe is going through a lot of stress doing Monica's job, having ice sculptures turning up and not knowing the technical name for orchids.

Meanwhile, Chandler and Ross find out that they aren't part of the wedding party and complain to Phoebe, who tells them they were next in line. When one of Mike's groomsmen can't make it, Mike lets Phoebe decide who gets to be in the wedding, who can't decide between them and passes the job to Rachel as a 'Bridesmaid job'. After both plead with Rachel, Mike decides it would be fun to have his dog, Chappy, as the missing groomsman. Phoebe, quickly overwhelmed with the wedding planning, gives Monica her job back wanting her to be "crazy bitch" again.

There is a giant blizzard, cutting off the band and the photographer. Although initially ready to call the wedding off, Rachel suggests they go ahead and get married outside Central Perk, as snow is no longer falling and the street looks amazing covered in snow. Phoebe and Mike agree, and they unleash Monica to get everything organized at short notice, a task she takes on with relish.

When Mike's parents arrive, Mike tells his mom that he knows she doesn't like the idea of getting married in the snow but she interrupts him and says she likes all the lights and the colors. Mike's dad tells him he put pills in her drink so she would accept the wedding. With the snow, Chappy can't walk on his own, so Ross and Chandler both volunteer to hold him (since whoever holds him would be included in the wedding). Ross gets it because Chandler is afraid of dogs, but Ross soon regrets it as Chappy smells. The minister is snowed in, so Joey offers to do it as he's still ordained from Monica and Chandler's wedding thinking it got him free subway rides. As Joey is no longer available to walk Phoebe down the aisle, Chandler gets the job allowing him to be included in the wedding too (and giving him one over on Ross who's now stuck with the dog).

With that, the wedding commences with Phoebe and Mike each saying their vows. Joey cuts the ceremony short when Ross warns him that Chappy's heart rate was slowing way down, and Phoebe and Mike and declared husband and wife.

Chandler and Joey return to their respective apartments, both wondering where Ross got to. Outside Ross is forced to wait in the snow for Chappy to go to the bathroom, which takes forever. 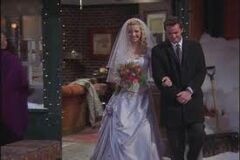 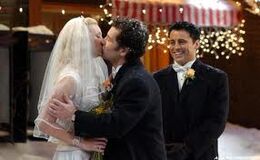