Friends Central
Register
Don't have an account?
Sign In
Advertisement
in: Friends Episodes, Season 2, Episodes with Ross' name in the title,
and 4 more

The One With The Breast Milk

"The One With Ross' New Girlfriend" is the second season premiere of Friends, which aired on September 21, 1995. Rachel tries to cope with Julie, Ross' new girlfriend, Phoebe gives Monica a bad haircut, and Chandler has an uncomfortable experience with Joey's tailor.

Having decided to tell Ross that she loves him (continuing from the cliff-hanger ending in "The One Where Rachel Finds Out"), Rachel goes to the airport to wait for him with a bunch of flowers for him. But Ross is not alone - he has a new girlfriend, Julie. We soon learn the two met in graduate school and reconnected in China. Rachel is crushed by the sight of her and tries to leave the airport, but falls and draws the attention of Ross and Julie, who greet her. Out of embarrassment, Rachel tries to make nice with Julie (who is American) by pretending that her flowers are for her, to make her feel welcome into the country.

Back at Monica's, the guys are waiting for Rachel and Ross to arrive from the airport. Monica notices the guys' new haircuts, which Phoebe did for them. Rachel arrives out of breath, visibly distressed, and tries to alert the rest about Ross and Julie, but fails to explain in time and Ross and Julie enter. Knowing her intentions when she left for Ross' arrival, the friends could not help but empathize with the difficulty of Rachel with the new situation.

Later at Central Perk, Rachel asks Chandler to talk with Ross to get an explanation of how everything happened and how it's going with Julie. Chandler's talk with Ross fails to console Rachel, as Ross confirms that he's having a great time with Julie. When he starts receiving lovey-dovey phone calls from her at Monica and Rachel's apartment, Rachel can't deal with it and leaves to go somewhere unknown.

The next morning, Rachel reveals what she "did" last night - Paolo. The friends aren't too happy to see Paolo, especially Ross, who is even less amused to hear what he was doing ("I do Raquel").

Meanwhile, Monica talks Phoebe into doing her hair. Phoebe is initially reluctant since she is worried that she won't live up to Monica's strict standards. Monica asks Phoebe to cut her hair like Demi Moore. However, Phoebe messes up the hairdo by confusing Demi Moore with actor Dudley Moore, giving Monica a short, mannish cut. Phoebe describes what she did to her to the guys, and makes Ross see her first to try and comfort her. With Ross out of the room, Joey takes the opportunity to talk to Rachel about how she's feeling and makes her see sense by making her go for Ross. He points out that Ross had loved her for a decade, while he's only been with Julie for a couple of weeks.

Chandler, who needs some new pants, goes to Joey's tailor, Frankie, who inappropriately grabs Chandler by the crotch to "measure the in-seam". Chandler becomes uncomfortable with this and tells Joey about it, describing Frankie as "a very bad man". Joey laughs Chandler off by telling him that that's how tailors measure pants, but Chandler and Ross make Joey reflect on it, shocking him.

Rachel finally talks to Ross about Paolo and how last night was just a fling. Ross gets his feelings for Paolo, specifically that he's "scum", off his chest. He talks to Rachel how he thinks she should be with someone who considers himself lucky to have her - like he is with Julie. When she hears this, Rachel has nothing more to say to him, realizing that Ross is truly happy with Julie. Ross comes in to find Joey telling his father "that's not how they measure pants!"

Phoebe asks Rachel how Andie MacDowell, who Julie asked the former to cut her hair like, wears her hair. Rachel gets her revenge by describing Andie MacDowell as "the guy from Planet Of The Apes". 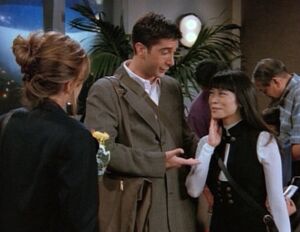 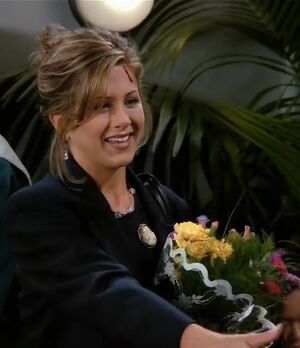 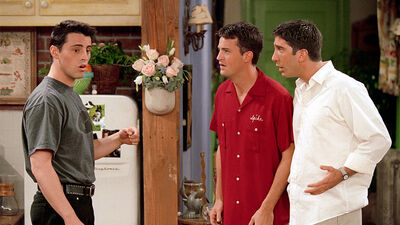