"The One With Ross' Step Forward" (also known as "The One With The Creepy Holiday Card") is the eleventh episode of the eighth season, which aired on December 13, 2001.

Ross and Mona took pictures of themselves at Rockefeller Center and now Mona wants to send the picture as a holiday card to friends. Ross panics at the thought of them sending out holiday cards together because they've only been dating a couple of months. He tries to avoid having "the conversation" about where the relationship is going, so he wants to make a gesture instead, resulting in him giving Mona a key to his apartment even though he doesn't want to and it is the only key. Ross then has the locks changed and Mona is confused. He then tells Mona he loves her (he doesn't mean it though) and she replies that she loves spending time with him too, letting Ross know that she isn't in love with him either.

Chandler's boss, Doug, has divorced his wife and invites Chandler and Monica to dinner, but Monica strongly dislikes him for drunkenly urinating on their ice sculpture at their engagement party, so Chandler decides to tell Doug that Monica and him split up so that she won't have to come. Doug, who is clearly depressed after divorcing his wife, takes Chandler to a series of bars and strip clubs to help him forget Monica, and Chandler has a miserable time with his drunk, crude boss, but later tells Monica that the worst thing of all about that night was seeing a glimpse of how he would end up if he ever lost her, and asks her to promise him she will never leave and grow old with him, and she does.

Rachel's pregnancy hormones cause her to lust after any and every guy she sees, and she finds herself wanting to sleep with Joey and Ross. To satisfy her craving, Phoebe brings a random guy called Roger to the apartment who says he'll have sex with her, but Rachel refuses the offer. 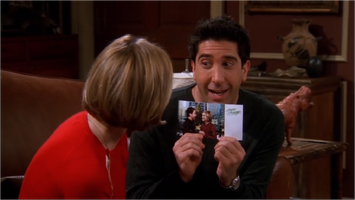 Retrieved from "https://friends.fandom.com/wiki/The_One_With_Ross%27_Step_Forward?oldid=89192"
Community content is available under CC-BY-SA unless otherwise noted.