The One With The Embryos

The One With The Embryos

The One With Phoebe's Uterus

"The One With The Embryos" is the twelfth episode of the fourth season of Friends, which aired on January 15, 1998.

Chandler and Joey's "chick" has unexpectedly grown into a rooster and starting crowing early in the morning, which the girls next door are not amused with at all, being very grumpy. But their anger vanishes into excitement for Phoebe, who goes to the fertility clinic - having accepted Frank Jr. and Alice's request, she is about to become their surrogate mother. However, she freaks out when she finds out it's five embryos that are being transferred and not just one, although not as freaked out as when she learns that even with five embryos, there's still only a 25% chance that she will successfully become pregnant. As the IVF is extremely expensive, Phoebe feels much pressure.

At Monica's apartment, Joey bets Monica he and Chandler know more about them than she and Rachel know about the guys. Quick to scoff in disbelief, Monica is also quick to lose when the guys manage to guess all of Rachel's items in her shopping bag. This quickly turns into a full-fledged trivia quiz about who knows more about whom with personal questions, Ross being the judge and quiz maker. Stakes fly high, but the quiz ends in a tie, and money is not enough for the challenge to be settled, so the girls ask the guys to get rid of the duck and the rooster should the former win. Chandler and Joey only accept the extreme wager on one condition- if the girls lose, the guys take their apartment.

Super-competitive Monica is quick to shake hands on the deal, but Rachel has doubts about this risky bet. However, there isn't much time to mull the decisions as the nerve-wrecking "lightning round" is about to start. Chandler and Joey get four questions right, but the girls only manage three (stumbling when asked about what Chandler's job is). As promised, Chandler and Joey swap apartments and start moving their furniture in. Rachel shouts at Joey and Chandler that it was not her fault, but Chandler and Joey refuse to leave since they'd have given up the birds had they lost. Phoebe, still freaked out about the low chances of pregnancy, joins the group, and when the pregnancy test results negative, she sits upside-down on the chair to "let gravity do its job". Frank Jr and Alice come over with another pregnancy test for her, which she takes. Rachel and Monica are still mad at losing the apartment to Joey and Chandler, and a big fight sparks off, when Phoebe comes out of the bathroom with a huge smile on her face - the pregnancy test is positive, and she'll be having her brother's baby.

In the closing credits, Rachel and Monica move into the guys' apartment. Rachel opens a drawer and sees something and the girls scream. Rachel kicks the drawer shut and they complain to each other how they hate the apartment. Meanwhile, Chandler is enjoying his spacious new apartment when he hears a shout from Joey. Joey tells Chandler that the wardrobe is huge, and that they are going to enjoy living there.

In a 2001 review, Entertainment Weekly rates the episode A+, stating that "Thanks to the trivia contest alone, Embryos is quite possibly Friends' finest moment". It singles out Rachel's line "He's a transpon-transpondster!" (in response to the question "What is Chandler Bing's job?") as the best of the episode. The authors of Friends Like Us: The Unofficial Guide to Friends call it a "sure-fire contender for the best episode of all time ... not one to be missed under any circumstances".

The episode is the favorite of Courteney Cox and Matt LeBlanc. Courteney likes the episode because she enjoys playing Monica at her most competitive, while Matt spoke fondly of the pace of the episode and the information about the characters that came out. He identified scenes that featured just the six core cast as the best, "because you don't have to introduce a character -- you don't have to lay any pipeline -- you just get right to the funny". 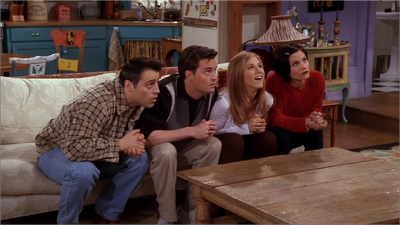 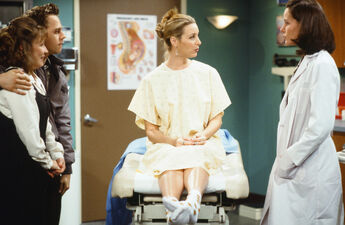 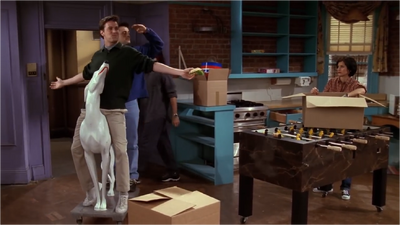 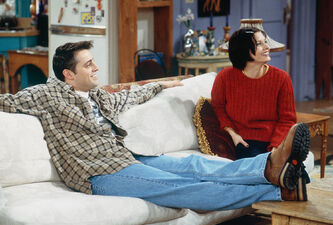 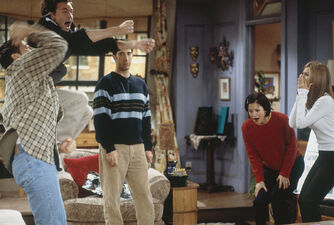 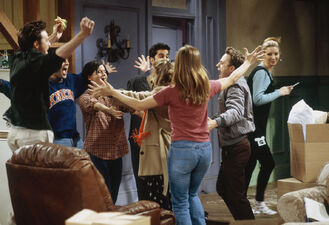