View source
watch 03:04
Episode Recap: The One With The Flashbacks
Do you like this video?
Play Sound

The One With Frank Jr.

The One With The Race Car Bed

"The One With The Flashback" is the sixth episode of the third season of Friends, which aired on NBC on October 31, 1996. After the friends reminisce about a time 3 years ago where the original cast; Monica, Ross and Phoebe, meet poster boy Joey for the first time as Chandler's new roommate. At this point, the friends hang out at a bar that will later be turned into Central Perk. The news of the conversion of the bar is revealed during the episode.

The episode begins with the friends sitting in the coffeehouse talking to Janice. Janice asks whether any of the group have slept together and if so, with who. When they deny that any of them have, she asks if any of them have "almost...", leading to the flashback.

The flashback takes place 3 years ago, exactly 1 year before the premiere. Phoebe has just moved out of Monica's apartment, but has not told her cause of how she might feel. She has been sneaking out every night and sneaking back in every morning, spending the past week at her grandmother's apartment. Chandler is trying to find a new roommate with little luck. Ross and Carol are having problems in their marriage. Ross thinks that this is cause Carol does not have any other friends, but he is optimistic because she just met a woman at the gym, Susan Bunch, and they bonded well.

The gang discovers that the bar is being converted into a coffee house. Rachel enters the bar for drinks with her friends. They celebrate the fact that in a year she will marry Barry. Rachel feels hesitant, saying that she wants one last fling with the next guy that she sees. Chandler overhears this and immediately interrupts her conversation by dropping a pool ball next to her table but Rachel shows no interest in him. Monica and Rachel briefly catch up, and make vague plans to get together in the future.

Chandler interviews Eric, a fashion photographer who informs Chandler that models would be at the apartment from time to time if he was to move in, and that his sister is a porn star. Chandler decides that Eric will be his new roommate and rushes through his interview with Joey after the latter believed him to be gay until Chandler tells him otherwise. Mr. Heckles shows up and when Eric informs Heckles that he is moving in with Chandler, Heckles claims that he is Chandler's roommate and sends Eric away. Chandler thinks he just never showed up, being angry with him and reluctantly accepts Joey as his new roommate, which Monica approves of. They bond over Baywatch and beers.

Monica is attracted to Joey and invites him into her apartment for some lemonade. Joey misinterprets her invitation, and strips naked.

Monica notices that Phoebe's bed is missing from her bedroom. After a poor attempt to cover her tracks, Phoebe admits that she has moved out. She says that Monica is too uptight about being neat and that she needs to "live in a land where people can spill". Phoebe says that she loves Monica and wants the two of them to stay friends, but she does not think it will be possible if they continue living together.

Chandler goes to Monica's apartment to get beer when he sees a slightly depressed Monica wearing nothing but a towel wrapped around her body. He asks if everything's doing okay, and she responds that Phoebe moved out. She then asks Chandler if she is so hard to live with and if that's the reason why she doesn't have a boyfriend. Chandler says he doesn't know why and that she should have a boyfriend. Chandler then comforts Monica by hugging her, which is only interrupted when he asks Monica if her towel's a 100% cotton.

Ross meets up with Phoebe at the bar. Ross reveals to Phoebe that Carol is a lesbian. Phoebe consoles him, and they start kissing which leads to them attempting to have sex on the pool table. After a few obstacles, they realize that it would be a bad idea and laugh about it. The gang then walks in and they act like nothing had gone on.

Ross tells the rest of the group that Carol is a lesbian. Having never met Ross before, Joey responds with, "Cool!". Chandler then introduces Ross and Joey.

The episode ends with Rachel driving a car with her friends in the back seats. She is fantasizing about going back to the closed bar and having sex with Chandler. After missing the exit, one of her friends asks her what she was thinking about, and she responds with, "Barry." 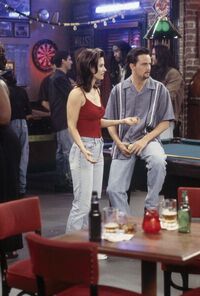 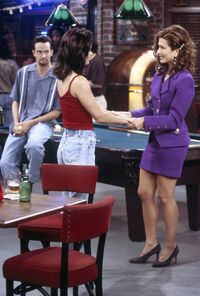 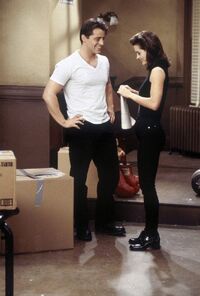 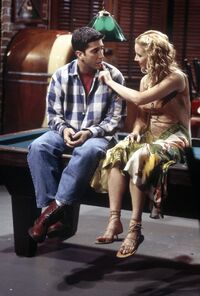 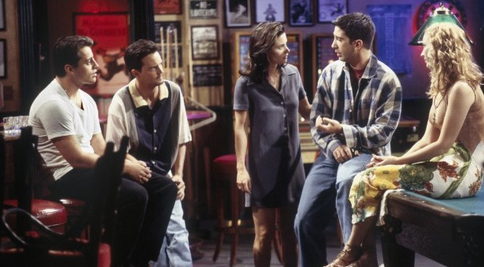