watch 03:27
Wiki Targeted (Entertainment)
Do you like this video?
Play Sound

"The One With The Football" is the ninth episode of the third season of Friends. It aired on November 21, 1996, serving as the Thanksgiving episode of the year. It was written by Ira Ungerleider and directed by Kevin S. Bright.

It is Thanksgiving Day and after watching a football game on television, the gang decides to play their own game of football. Monica and Ross are reluctant and tell the others that when they were kids, they would play football on Thanksgiving in what they called the Geller Bowl competing for the Geller Cup. However the two would get so competitive that during Geller Bowl VI Monica ended up breaking Ross' nose, leading their parents to throw the Geller Cup into the lake and forbid them from playing football again. With the gang egging them on, they decide to play anyway. Monica picks Joey and Phoebe, Ross picks Chandler and ultimately, Rachel, who is upset about being last picked. The guys refuse to include Rachel on any plays, as she is terrible at football. She gets so bored, she wanders off for a snack. Things get heated between Monica and Ross, and the competition becomes even more fierce when it's revealed Monica has the Geller Cup (revealed to be a troll doll glued to a lump of wood), having retrieved it from the lake by swimming while Ross was taken to the hospital.

As they play, Joey and Chandler meet a Dutch girl, Margha. They both try to impress her. She finally picks Chandler once Ross forces her to choose between the two guys. Once Chandler does a victory dance, Margha changes her mind and picks neither of them; however, Chandler continues to gloat about his "victory".

After Monica's team has the lead, Ross is upset. They orchestrate a trade: Rachel for Joey, turning the game into a Battle of the Sexes. The girls try to beat the men by using their femininity, including making Phoebe repeatedly show off her breasts to Chandler. During the last 30 seconds, Monica has no choice but to throw to Rachel, who finally catches the ball, then seemingly scores and spikes the ball. However, Chandler points out that she was actually short of the goal line, and Phoebe realizes that since no one tackled Rachel, the ball is still live. Ross and Monica dive for the ball and get into a jump ball situation. Several hours later, the rest of the gang has retreated upstairs to have Thanksgiving dinner, while Ross and Monica continue to fight over the ball in the dark, only momentarily paused by the realization it is starting to snow.

Chandler: Guys, guys, come on, it's Thanksgiving! It's not important who wins or loses. The important thing is the Dutch girl picked me! [To Joey] Me, not you! Holland loves Chandler! Thank you Amsterdam! Good night!

The Ending of the Uncut DVD Version 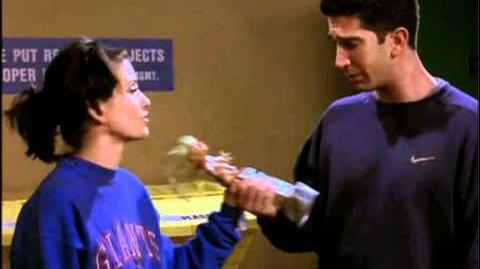 Retrieved from "https://friends.fandom.com/wiki/The_One_With_The_Football?oldid=89908"
Community content is available under CC-BY-SA unless otherwise noted.