The One With The Girl From Poughkeepsie

"The One With The Girl From Poughkeepsie" is the tenth episode of the fourth season of Friends, which aired on December 18, 1997.

Although it's almost Christmas, not everyone is in a really festive mood, and Rachel, Ross and Monica, in particular, face some tough times ahead of the holidays.

Following her highly negative review which earned her the head-chef job at Allesandro's, Monica is being tormented by her colleagues, even as head chef. Even if no amount of burned chef jackets and "Quit Bitch"-signed hats is enough to make Monica quit, the attitude she receives from fellow chefs and waiters almost pushes her off the edge. She takes Chandler's advice and hires Joey as a waiter for the sole purpose of firing him in front of the others to scare them, but when Joey finds himself with a handful of tips, he forgets the deal he and Monica have. Only when he truly sees the degree of cruelty and abuse Monica is being forced to endure (which almost makes her resign) that he sticks to his part and plays the arrogant employee. Monica quickly takes advantage of this and fires Joey in front of everyone, which Joey seems to take a little harder than he expected. This is enough for Monica to acquire control over her colleagues who realize they could get fired anytime too.

Rachel hates to be single around the festive season, and is more willing than usual to have a fling with someone rather than something serious. Chandler knows of a couple of guys at work who might do the trick for her, which he uses in his favor to obtain free stuff from them. After picking her preferred guy, Patrick, Rachel starts to believe in something more than a fling between her and him, but when she learns that Chandler told Patrick how all she wants is a fling, she's furious with him. Chandler tries to rectify his mistake, but telling Patrick that Rachel might be interested in a serious relationship with him is another mistake which leads to Rachel being dumped before Christmas. Angry that she's all alone again, Chandler consoles her on how he never lied once about her to his colleagues, which makes Rachel appreciate their friendship more.

Ross meets an amazing girl from Poughkeepsie on the train, whom he finds really beautiful, smart and funny. All that is keeping him from this girl is the considerable distance between him and her. Things are different with another girl from uptown - she's really close and easy to reach, but isn't smart, not funny and a bigot. Managing time between the two girls is too much for him, and he ends up exhausted from dating both of them. He breaks up with the girl from uptown, and doesn't even manage to talk to the girl from Poughkeepsie as he falls asleep on the train. He only wakes up in Montreal, next to a beautiful blonde woman who asks him out for coffee. Just as things might head in a new, exciting direction, he learns that the woman is from Nova Scotia.

Phoebe finds it hard to write a special holiday song about all of her friends because of the lack of good rhyming words, but it only takes some of her more fertile imagination to solve the problem. She sings the song at the end of the episode. 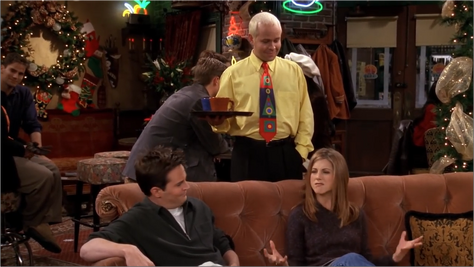 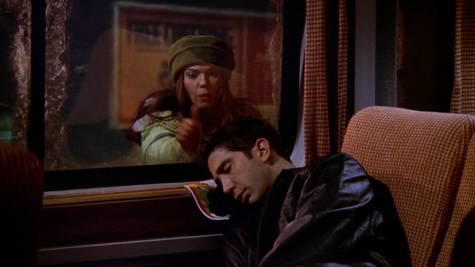