The One With The Jam

"The One With The Jam" is the third episode of the third season of Friends, which aired on October 3, 1996. Monica, tired of being upset after breaking up with Richard, decides to start making jam in large quantities.

Monica has decided she needs a project to help her get over Richard, so she decides to make tons of jam (the 'Jam Plan'). When she realizes that she is spending more than she can potentially make by selling the jam, she comes up with a new plan (the 'Baby Plan'). Monica wants to go to the sperm bank in order to get pregnant and have a baby. She searches through potential sperm donors, even coming across Joey, until she finds the one. Everyone disapproves of this plan, but Joey is the one to talk her out of it when he starts depicting her as a married woman with kids, which is what Monica really wants to have.

After somehow managing to call Janice fat by accident, Chandler goes looking for help from Ross and Rachel. They are willing to help him out, until Chandler asks about the cuddling problem that he has at night, when he cannot sleep comfortably because Janice is cuddled up against him. Rachel says that she and Ross are "cuddly sleepers" and tells him that they cannot help him. Ross, on the other hand, knows exactly what Chandler is experiencing and lets him in on a secret after Rachel has gone to work. He explains how, with Rachel, he waits for her to fall asleep and then hugs her to his chest, and rolls her to the other side of the bed.

Unfortunately, Chandler does not succeed in carrying Ross' solution without rolling Janice off the bed. He also fails to keep his secret from Janice, who tells Rachel, who becomes annoyed at Ross.

Meanwhile, Phoebe is being stalked by a strange man, Malcolm, who thinks that she is Ursula. It turns out, that in spite of his restraining order, he is still crazy about Ursula, who went on a date with him and then refused to return his calls. Phoebe helps him get over her, but as she has a crush on him, she starts going out with him instead. Things go well until she is convinced by her friends to follow him to see if he is still following Ursula. He is sad that Phoebe does not trust him and has taken to stalking him, but as it turns out, Malcolm is still stalking Ursula. Understandably, this freaks Phoebe out, and she breaks up with him. She does however offer to help him get over Ursula and even suggests he stalk her for a while - which he immediately does.

Rachel: What happened to your jam plan?
Monica: I figured out I'd need to charge 17 bucks a jar to just break even. So I've got a new plan now. Babies.
Chandler: Well, you're gonna need much bigger jars. 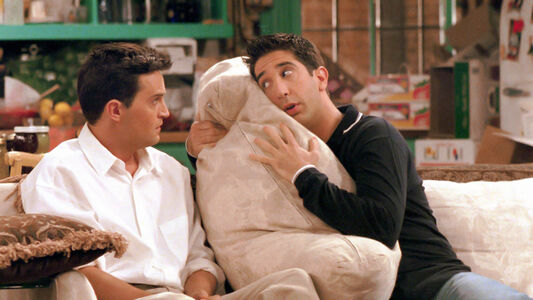 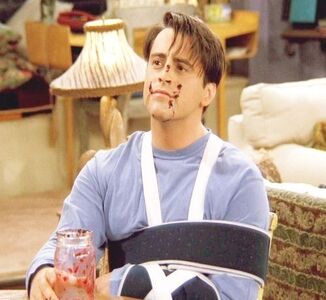