The One Where Ross Finds Out

The One With Phoebe's Dad

"The One With The List" is the eighth episode of the second season of Friends, which aired on November 16, 1995. In this episode, Rachel makes a painful discovery concerning Ross. Monica's new boss gives her an impossible task.

Rachel and Ross tell the girls and the guys respectively of their kiss. Rachel thinks it was absolutely amazing, while Ross is still torn between her and Julie. Chandler tries to help him out with choosing one of Rachel and Julie by printing a list of flaws each of them have from his new computer. Ross lists every flaw he could think of Rachel - describing her as "spoiled, ditzy, too into her looks, and just a waitress" - but when he comes to Julie, all he can manage to point out is: "She's not Rachel". Chandler doesn't manage to print the list and phones the computer company to complain about it.

Monica has a job interview, for which she has to produce a number of recipes using Mockolate, a synthetic chocolate substitute which they hope to capitalize for Thanksgiving. Monica finds difficulty integrating the disgusting ingredient in good recipes, but she tries to do so anyway. This fails as Rachel and Phoebe are disgusted from eating the Mockolate, and Phoebe describes it as "what evil must taste like." Monica presents her recipes to the interviewer, who sadly informs her that the FDA approval for Mockolate didn't arrive, but gives her a check for her efforts anyway. He does, however, ask her if she experienced any side effects from eating Mockolate, including any burning sensation during peeing.

Ross manages to break up with Julie, having set his heart on Rachel. Rachel enters and asks Ross what's happening. With Joey's help, Ross finally gets with Rachel. He goes to grab her coat, but Rachel sees the list on the computer, but does not know what it was. Even worse, after several useless attempts, the printer manages to spit out the list. Rachel manages to obtain the list from the guys and reads her flaws out. Devastated and hurt, she demands an explanation from Ross, who can't seem to put words together to explain everything to her, and when she reads Julie's flaws ("She's not Rachem" - a typographical error by Chandler), she thinks Ross is making fun of her for being just a waitress.

Ross tries several more times to try and apologize to Rachel, climbing up the fire escape in the pouring rain to read her pros list, but she doesn't want to hear a word. Ross tells her that if it were her who made the list, nothing she could write would stop him from wanting to be with her. She replies that she would have never been so cruel as to make such a list, which she guesses is the difference between her and him. Ross dedicates a song to Rachel over the radio in a last desperate attempt at apologizing, but Rachel calls the radio station to tell the DJ what Ross did. This causes the DJ to stop playing Ross' song halfway, describing Ross' action as "pretty appalling."

Monica meets her interviewer again, this time to be introduced to Fishtachios - pistachios of reconstituted fish bits. The interviewer asks if she's allergic to anything, and when Monica mentions her allergy to cat hair he decides she shouldn't try any. 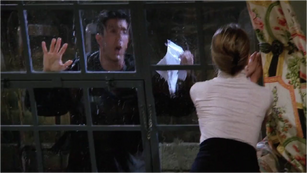 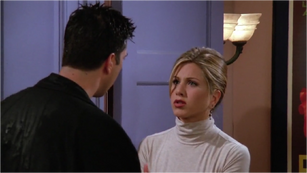 Ross tries to reconcile with Rachel 2.