The One With The Prom Video

The One With The Prom Video

The One After The Superbowl, Part 2

The One Where Ross And Rachel... You Know

"The One With The Prom Video" is the fourteenth episode of the second season of Friends, which aired on NBC on February 1, 1996. The episode focuses on the main characters watching Monica and Rachel getting ready for their high school prom in the titular video. A subplot sees a now-wealthy Joey buying roommate Chandler an unusual gift.

The episode was directed by James Burrows, written by Alexa Junge and guest-stars Elliott Gould and Christina Pickles as Jack and Judy Geller, and Patrick Kerr as the restaurant manager. It frequently ranks among the series' best episodes in polls.

After he starts making more money playing Dr. Drake Ramoray on Days of Our Lives, Joey gives Chandler an extremely tacky gold, engraved bracelet as thanks for paying for head shots and food. However, Chandler mocks it when it costs him a date, greatly upsetting Joey when he overhears. Chandler apologizes to Joey and promises to never take it off again, though later loses it. He reluctantly buys a replacement, but the original is found shortly afterwards. When Joey sees Chandler holding two bracelets, he gives one to Joey, repairing their friendship and making up for it.

Ross continues to seek forgiveness from Rachel for the list, but she tells him that they together as a couple will never happen. Phoebe thinks otherwise, however, calling Ross and Rachel lobsters. When she receives blank looks, she explains: "It's a known fact that lobsters fall in love and mate for life. You can actually see old lobster couples walking around their tank, holding claws." Monica returns from a bad interview at a restaurant where the chef tries to come onto her. She mulls over her options now that her funds are dwindling, but is anxious of whether to borrow from her parents. Jack and Judy Geller bring boxes of Monica's possessions to her apartment because they are turning her room into a gym. Monica eventually tells them that she was fired from her job. However, Jack reminds Monica that 10% of her paycheck goes to her bank account and encourages her to use her savings, assuring them that they will be there to lend money to her whenever she needs it. Ross also lends her money to help pay for her rent.

While looking through the box of possessions, Monica finds a video of her and Rachel getting ready for their senior prom. The friends decide to watch the video although Ross objects to everyone seeing the tape. The video reveals that Monica was previously obese, and that Rachel had a large nose. Rachel seems to be stood up by her prom date, Chip Matthews, so after some persuading from Judy, Ross plans to take her to prom instead. He dresses up in his father's tuxedo, and finds a makeshift flower bouquet, but Rachel's date shows up before she learns of Ross' plans. The video ends with Ross looking disappointed and rejected. Rachel, touched by Ross' gesture, gets up and passionately kisses Ross, forgiving him for what happened between them. The episode ends with Phoebe exclaiming "See, he's her lobster!"

During the end credits, Monica finishes watching the tape, and inadvertently finds a recording of Jack and Judy having sex.

The producers had kept Ross and Rachel from being together throughout the first season, eventually bringing them together in the second season episode "The One Where Ross Finds Out", only to split them up in the following episode. Writer Alexa Junge incorporated many of her own experiences into the script, in particular Phoebe's line about Ross and Rachel being "lobsters", something Junge's husband once said. Aniston wore a false nose for the scenes in the video while Cox wore a "fat suit". While a previous episode had already established Monica as being overweight as a child, this was the first on-screen appearance of "Fat Monica" (the fat suit made frequent return appearances). Rachel's large nose was added because Junge believed that the characters "were so good-looking, you wanted to feel they had some realness in their past".

At first, Schwimmer did not want to wear the afro wig and mustache because he thought he would look like Gabe Kaplan in Welcome Back, Kotter (a similarity referenced in the episode). He relented because it enabled him to "tap into a part of himself that was very vulnerable and shy" and incorporate it into his performance. An early script draft featured a scene in the prom video in which an episode of All My Children is on in the background. The scene was intended to feature the character "Bryce", played by Gunther (as it was revealed that Gunther had once had a role as this character in this sitcom in "The One Where Eddie Won't Go").

Entertainment Weekly rates the episode "A", welcoming the return of Burrows as director and calling the prom video "witty character development disguised as a standard flashback." The authors of Friends Like Us: The Unofficial Guide to Friends write that it is "a watershed in the history of the show" and "It's the sign of a good show that they can switch so effortlessly from comedy to pathos to romance in one short scene." Robert Bianco wrote in USA Today in 2004, "If any one outing can take credit for moving Friends from good to great, it's Prom Video" and describes the resolution as an "ingenious, unexpected twist."

The episode is popular among fans of the series. It appeared on one of the first region 1 "Best Of" DVD releases and is one of the two episodes to feature an audio commentary on the region 1 DVD release of the complete second season. In a poll conducted shortly before the series finale, "The One with the Prom Video" was voted the best episode of Friends, with 1.6 million people polling on the Internet. The episode is the favorite of Schwimmer, who liked the comedic and emotional origins of the Ross/Rachel relationship, as well as the exchange between Monica and Chandler as she defends her weight on the video. 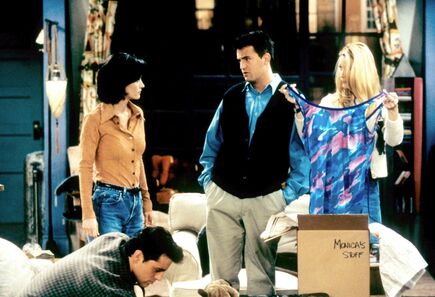