The One With The Secret Closet

The One With The Secret Closet

The One Where Chandler Takes A Bath

The One With The Birthing Video

"The One With The Secret Closet" is the fourteenth episode of the eighth season of Friends, which aired on January 31, 2002.

Monica is getting massaged by a professional masseuse, while she never lets Phoebe massage her. This upsets Phoebe, who wants to be the one that massages her. When Phoebe can't stand Monica any longer, Monica agrees that Phoebe can massage her, and it turns out that she likes her massages very much - so much, that she starts making sex noises, which Phoebe doesn't like at all and finds very annoying. As she tells Monica, Monica is afraid that she can't get massages again, but Phoebe knows a way to fix this: she acts that she really likes it, which makes both of them uncomfortable and ends the massages.

Joey has a dream about Rachel giving birth to his baby, who turns out to be little baby Ross, exclaiming I hope you're a better father than you were a friend. Just that moment, Rachel storms in: the baby is kicking for the first time. Ross is disappointed that he has to miss all pregnancy-related stuff and wants Rachel to call him every time something happens. When Rachel has Braxton-Hicks contractions, Joey calms her and takes her to the hospital. Ross again comes way too late and when the doctor even thinks that Joey is the father, he feels very left out. Joey then suggests that Rachel moves in with Ross. While Rachel is reluctant at first, she agrees, which kills Joey, as he really liked living with Rachel. He reveals his feelings about living alone to Chandler, and quickly gets so depressed that he asks for a hug, which Chandler gladly gives him.

Bob and Faye Bing, whom Chandler hasn't seen in fifteen years, send Monica and Chandler a very ugly punch bowl. Chandler wants to throw it out onto the street, but Monica refuses in case they ever stop by. Chandler wants to put it in the closet by the bathroom, which turns out to be locked, after which Chandler realizes that he has never seen what's in there and when Monica refuses to show it to him, he starts trying to break it open. It doesn't work using his credit card, nor does Joey succeed in opening it with a wire. He finally manages to break the door open all on his own - using his wife's tools. It turns out that there's a giant mess of all kinds of crap behind the closet, which is the reason why Monica wouldn't let him see what's behind it, as she feels really bad about it. She makes him promise not to tell anyone about it, but when he offers to use the closet for storing his own stuff, she is afraid that he might "mess it up". 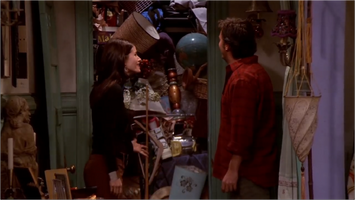 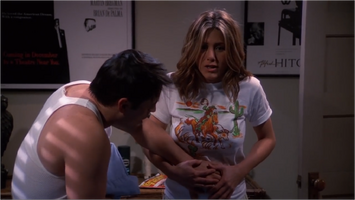 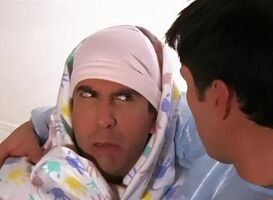 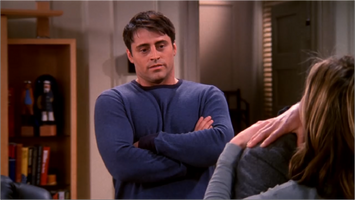 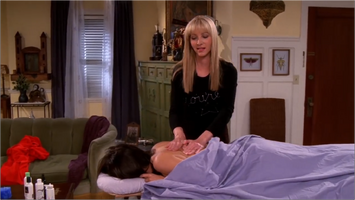