"The One With The Sonogram At The End" is the second episode of Friends. It premiered on September 29, 1994. It was written by Marta Kauffman & David Crane and was directed by James Burrows.

The episode begins with the gang sitting around in Central Perk discussing the importance of kissing in a relationship. Chandler compares kissing to the opening act of the stand-up comedian you have to sit through before Pink Floyd comes out. Ross mentions that men do not dislike the comedian - it is just not why they bought the ticket. Continuing the metaphorical theme, Rachel makes the point that, if men don't bring the comedian back after the show, men will be sitting at home next time, listening to the Pink Floyd album alone. Joey is completely stumped at this point, unsure whether they are still talking about sex.

At the Museum of Prehistoric History, Ross and a colleague set up a display of cave people. Ross' homosexual ex-wife Carol arrives, and she makes it clear to him that she is still a lesbian. It is a little uncomfortable between them, so Carol announces that she is pregnant with his child.

In the next scene, Monica frantically cleans the apartment in time for the arrival of her and Ross' parents. Rachel looks for her engagement ring so that she can give it back to Barry. She then realizes that she has lost it in Monica's lasagna.

Monica can't bring herself to destroy the dish to retrieve the ring, so Chandler, Joey and Phoebe volunteer to do it. A stunned Ross arrives and tells his friends about Carol and the baby. Phoebe then finds Rachel's engagement ring in the lasagna, so Joey helps himself to the rest.

In the next scene, Jack and Judy Geller have arrived, and it soon becomes clear how they favor Ross over Monica. Judy is catty and critical towards Monica and everything she does, whereas Jack is more gentle, but quite blunt, making the point that Monica was "chubby and had no friends" when she was a child. Pushed to the edge, Monica forces Ross to admit the Carol situation to their parents. Instead of interrogating Ross, Judy turns to Monica and accusingly asks her, "And you knew about this?"

At Barry's dental clinic, Rachel learns that Barry is now with Mindy, her former maid of honor, and that he went on their honeymoon with her. Rachel tries to play it cool, but she is actually hurt that Barry has already forgotten her and moved on so quickly.

Meanwhile, Ross meets Carol and Susan at the OB/GYN clinic. Things get complicated because Ross feels that Susan is getting too involved in decisions about the baby, and he feels like he is being pushed out. When he finds out that Carol and Susan don't even want the baby to take his last name, he decides that he doesn't want to be involved anymore. He is about to leave, but then he sees the sonogram on the monitor, so he stays to watch.

In the closing credits, the friends watch a tape of the sonogram on Monica and Rachel's TV. Chandler, Joey, and Phoebe come up with a variety of strange resemblances, and Monica wells up at the thought of being an aunt. Rachel is on the phone to Mindy and congratulates her on her relationship with Barry. She hangs up, but not before shouting down the phone, "If everything works out, and you guys end up getting married and having kids - and everything - I just hope they have his old hairline and your old nose!"

Phoebe: You're all chaotic and twirly, and not in a good way!

Judy Geller: [about Rachel] Well, at least she had the chance to leave a man at the altar.
Monica: What's that supposed to mean?
Judy Geller: Nothing. It's an expression.
Monica: No, it's not.
Jack Geller: Don't listen to your mother. You're independent and you always have been. Even when you were a kid, and you were chubby and you had no friends, you were just fine! And you'd read alone in your room, and your puzzles...

Jack Geller: There are people, like Ross, who need to shoot for the stars, with his museum and his papers getting published. Other people are satisfied with staying where they are. I'm telling you, these are the people who never get cancer. They're happy with what they have, they're basically content, like... cows.

Ross: [talking about the baby's surname] Wait a minute, why is she in the title?
Susan: Because it's my baby, too.
Ross: That's funny, I don't remember you making any sperm!

Joey: Are we still talking about sex? 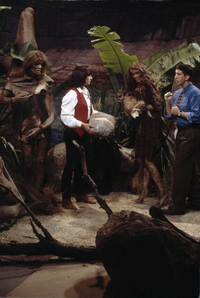 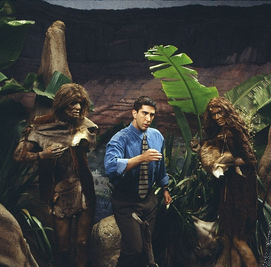 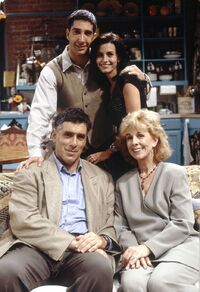 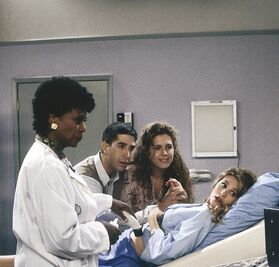 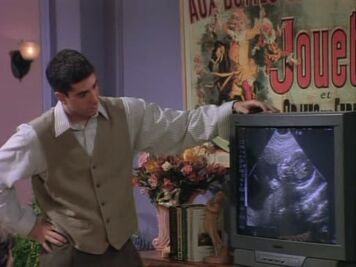 Retrieved from "https://friends.fandom.com/wiki/The_One_With_The_Sonogram_At_The_End?oldid=84918"
Community content is available under CC-BY-SA unless otherwise noted.