Friends Central
Register
Don't have an account?
Sign In
Advertisement
in: Friends Episodes, Season 8, Mona and Ross,
and 2 more

The One With The Tea Leaves

The One With The Tea Leaves

The One Where Joey Tells Rachel

The One In Massapequa

"The One With The Tea Leaves" is the seventeenth episode of the eighth season of Friends, which aired on March 7, 2002.

Things have gone awkward between Joey and Rachel after their date the previous night. Rachel is desperate to get back on good terms with Joey, so she takes Monica's advice to change the subject to something work-related and ask his advice on a problem. However, she can't think of anything to say and ends up blurting out that her boss wants to buy her baby. Joey then goes to Rachel's work and yells at her boss. Rachel panics upon hearing this for the first time, but cheers up when her boss apologizes for inadvertently sounding like he wanted to buy the baby and is so afraid that she will sue that he gives her an extra month of paid maternity leave. However, it becomes awkward between Joey and Rachel again which causes her to blurt out another lie - "my gynecologist tried to kill me!".

When Phoebe reads her own tea leaves, she sees that she'll meet the man of her dreams soon. She assumes it's a guy she has been seeing practically every day on her errands, and finally talks to him. He asks her out despite being slightly bemused when she misunderstands the pretty obvious meaning of a remark he makes but when they go on the date, he intimidates her with a number of highly inappropriate, rude, and vulgar comments, seemingly just to amuse himself. He also claims, most likely lying in yet another attempt to intimidate her, to be a writer of "erotic novels for children" which are "wildly unpopular". Phoebe then has to find a new dry cleaning facility to avoid encountering her abnormal date again, and meets a cheerful gentleman named Parker, who she finds more to her taste.

Ross left his pink (according to him, faded salmon colored) shirt at Mona's apartment. When he knocks on Mona's door, there is no response, but he finds a key and lets himself in. However, Mona and her date enter seconds later. When Mona's date's shirt has wine spilled on it, she offers him Ross' pink shirt. Ross hides behind the couch as the two begin to kiss passionately - when Mona takes off the shirt and tosses it aside, Ross attempts to get it by pulling the carpet, but this causes the table to move and Mona discovers his presence, which causes Ross to take the shirt and leave. Mona shows up at his apartment later, telling him that she knows he came to her apartment because he still has feelings for her but tells him that it is too complicated and that it can never be. When she takes the pink shirt and asks Ross if she can keep it as something to remember him by, he refuses. 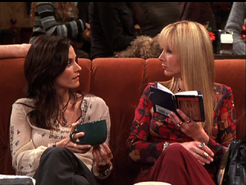 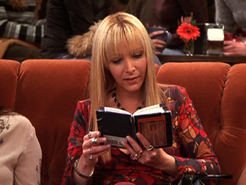 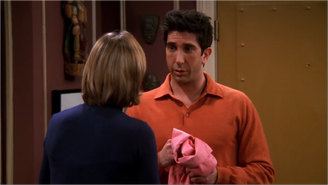 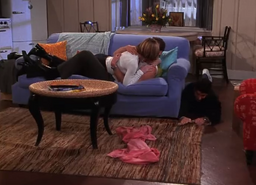 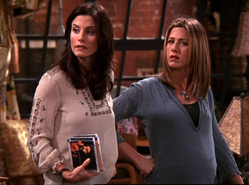