The One Without The Ski Trip

The One Without The Ski Trip

The One With The Morning After

The One With The Hypnosis Tape

"The One Without The Ski Trip" is the seventeenth episode of the third season of Friends, which aired on March 6, 1997.

It's a week after Ross and Rachel's break-up and they can't even stand being in the same room as each other, each blaming the other for their separation while their friends are caught in the middle as they try to keep them apart as much as possible. Chandler finds the break-up of the two friends particularly stressful as it reminds him of his parents' divorce and he starts to smoke again, to try to relieve his stress.

When Ross asks the guys to hang out with him, they have to dismiss the idea of attending a fashion show with Rachel. To get back at him, she invites them over to her sister's cabin for a ski trip, which the guys agree to instead of a LaserDisc weekend marathon playing darts with Ross. The guys leave for the cabin but they have to pull in so that Chandler can go to a restroom. Rachel, however, closes the door of the cab, which has the keys locked inside. After some arguing, Joey gets Phoebe to give him her bra, pulls out the wire and picks the car lock. Everyone is about to leave, but the car runs out of gas.

Saddened and alone, Ross seeks solace in Carol and Susan at their apartment. Only Carol's there, so he opens up his heart to her about him and Rachel breaking up, even though Carol has clearly set up a special romantic dinner to celebrate the first time she slept with Susan. Also, Ross tells her an edited version of the story which neglects to mention that he cheated on Rachel, instead casting her as the guilty party for cheating on him with Mark. Meanwhile, Monica distracts Rachel and Phoebe calls Ross for help. Carol intercepts the call just as Ross is mocking Phoebe and sends him off with her car so that he can help his friends, because "we both know you're gonna do it, cause you're not a jerk!". However, when Carol mentions the story that Ross told her, Phoebe sets her straight over the phone and Carol is, of course, furious. She tries to mock Ross by telling him, "you slept with another woman", to which Ross replies: "Oh, you're, you're... one to talk".

Joey and Chandler's search for help does not go well, and the guys have to wait for Ross. In the hope of finding the group, Joey arranges some twigs to read PLEH, which is HELP spelled backwards "so that the helicopters can read it from the air". Eventually, Ross finds the guys and fills their tank. Rachel leaves without a sign of gratitude, sparking up the fight again and dragging the others into it. Phoebe interrupts them and tells Ross and Rachel they need to find a way to be together without arguing, or else they can forget about everyone hanging out together. Joey agrees and adds they also need to stop putting everyone else in the middle of it. Ross and Rachel promise to try and do so, and Ross lets the guys go on the trip. As he's about to turn around, his car battery falls flat.

Ross manages to get back to Carol in the middle of the night, having bought a new car battery, but Carol, who's not exactly sleeping, closes the door in Ross' face. 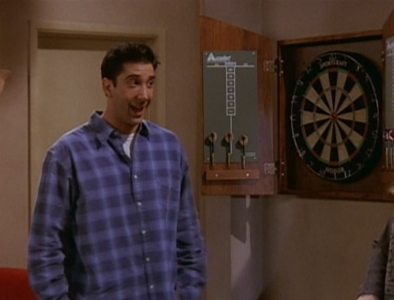 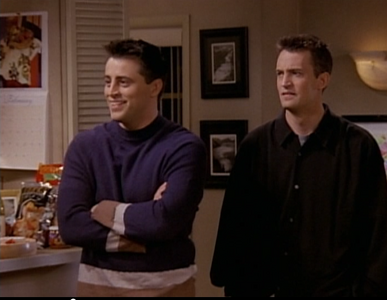 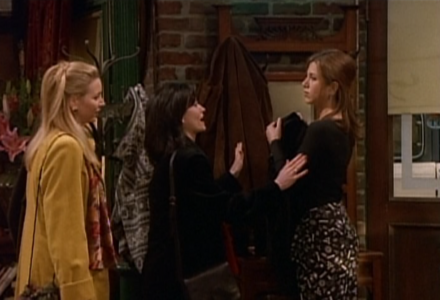 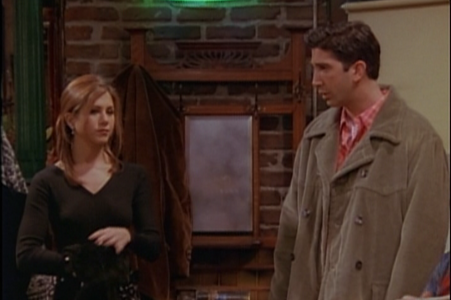