"The Pilot" (also known as "The One Where It All Began", "The One Where Monica Gets A Roommate" and "The First One") is the first episode of Friends. It premiered on September 22, 1994. It was written by Marta Kauffman and David Crane, and was directed by James Burrows.

The episode begins with 4 friends; Monica, Joey, Chandler and Phoebe, sitting in their local coffee house Central Perk, discussing Monica's date for the evening. Monica's brother Ross soon arrives at the coffeehouse, looking miserable. It is revealed that his ex-wife, Carol, has moved her things out of their apartment, due to the fact that she is a lesbian and no longer has feelings for Ross. Joey unhelpfully suggests that and desperate Ross take advantage of the fact that he is now single by going to strip joints, and an exasperated Ross cries out, "I don't want to be single, okay? I just want to be married again!" As soon as Ross says this, a woman enters the coffee house wearing a wedding dress, causing Chandler to remark on the coincidence of it, saying: "And I just want a million dollars!" It turns out the woman is Rachel Greene, who was Monica's best friend in high school, and has arrived to ask Monica for help, as she has just left her fiancé at the altar after realizing that she does not love him.

At Monica's apartment, the group watches a Spanish soap opera and pretends to translate the lines. Rachel talks on the phone with her father, trying to explain why she ran away, declaring that she does not love her fiancé, Barry. She also tells him that she will stay with Monica. Ross asks the guys to help him set up his new furniture, and he asks Rachel if she would like to join them, but she wants to stay by herself. While she spends the night alone in Monica's apartment, Phoebe busks in the subway and Monica goes on her date with Paul. Meanwhile, the guys attempt to construct Ross' new furniture. The apartment is practically empty, as Carol has taken all of the furniture, the stereo and the good TV. Ross confides in his friends about his sadness at being divorced at 26. In an attempt to comfort him, Joey advises him to get a grip on his life and go out with other women in order to get over Carol. He reminds Ross that there are many different women in the world, just like there are many different flavors of ice cream in the world, and encourages him to metaphorically "grab a spoon."

At Monica's apartment, Rachel attempts to leave a number of messages to Barry in order to apologize to him, and sobs to herself as she watches Joanie loves Chachi in the living room. On her date, Monica is getting to know Paul, who reveals to her that it has been two years since he last performed sexually after a painful breakup. Shocked, Monica spits her drink on him and quickly apologizes. She is touched that he has told her, and the pair end up going home together and having sex. After Joey leaves to go out on on a date with a woman whose name he has trouble remembering, Ross asks Chandler, "Even if I could get it together enough to ask a woman out...who am I gonna ask?" He gazes out of the window, and in the next clip, we see Rachel sitting on the window seat at Monica's apartment with a saddened, lonely expression.

The next morning, Rachel is determined to turn over a new leaf and makes coffee for the first time in her life. Unfortunately, it tastes disgusting. Rachel, Chandler and Joey overhear Monica making plans to see Paul again and kissing him goodbye at the door. Monica, Chandler, and Joey tell Rachel that they all have jobs. Monica then goes to work, where a colleague tells her that she too had slept with Paul, and that she was his first sexual partner for two years. Monica then realizes that Paul lied to her to get her into bed. After Monica tells the group that Paul had used her, Joey cannot believe that she did not see it coming. Rachel arrives after buying herself a pair of fancy boots with her father's credit card. This prompts the gang to drag her into the real world, and they encourage her to cut all her credit cards in half.

Later that night, Monica, Ross and Rachel watch TV. Monica goes to bed, stamping on Paul's watch on her way. Ross tells Rachel that when they were teenagers, he had a major crush on her, and she reveals that she knew. A surprised Ross states that he believed that she had always thought of him as "Monica's geeky older brother" and nothing more, which Rachel did. Ross takes the opportunity to ask her if it would be okay for him to eventually ask her out, and Rachel tells him that that would be okay. She leaves the room, and Ross tells Monica that he has "grabbed a spoon." During the closing credits, it is revealed that Rachel has gotten herself a job at Central Perk. When the gang ask her if she has made the coffee, she tells them that she is just serving it - so they feel safe to drink it.

David Schwimmer was the first to be cast. Having already auditioned for a different pilot for Kauffman and Crane in 1993, the part of Ross was written with him in mind. Lisa Kudrow's role as Ursula on Mad About You attracted the producers to her (later episodes would establish Ursula as Phoebe's twin sister). Courteney Cox was considered for the role of Rachel, but after reading the script, she read for Monica. Matt LeBlanc was cast as Joey because the producers wanted "a guy's guy". LeBlanc auditioned over eight times, and his final one was a reading with Jennifer Aniston and Cox. Matthew Perry had previously worked with Kauffman and Crane in an episode of Dream On, and requested an audition after identifying with Chandler. He was denied the audition because he was "off the market" after appearing in a pilot called LAX 2194. Jon Cryer auditioned for Chandler while appearing on stage in London. He read for a British casting director who sent a video tape of his audition to the casting executives in Los Angeles, though the tape did not arrive in time. Perry was eventually cast when the network and producers decided his other pilot would not be commissioned for a full series. Jennifer Aniston was cast last, having originally been eyed for Monica. She was already in another series called Muddling Through on CBS but this was cancelled after one season, the last episode airing 2 weeks before The Pilot.

Once the six had been cast, James Burrows, the director of the pilot episode, decided to take the cast to Las Vegas for dinner. "It's really important for me that the cast bond," he explained. "You knew from the instant we shot the pilot how electrifying the six of them were together. So we got on a plane to Vegas and we had dinner at Wolfgang Puck's restaurant there. And I remember telling the cast, 'This is your last shot at anonymity.' And it was true. I also remember they all needed money to gamble. So a couple of them wrote me checks, because I had some cash. The biggest check I got was $200. So times have changed."

When the pilot was first pitched the producers intended Phoebe and Chandler to be secondary characters who provided humor around the other four main characters, though by the time filming began they were a part of the core six. Ross was originally to be younger than Monica and Phoebe didn't live with her grandmother. There was also a discussion about Monica taking in a young pregnant woman. NBC also wanted an older character whom the series creators nicknamed Pat the cop. Joey and Chandler were originally written similarly but at the request of Burrows, Joey was "dumbed up a bit". NBC Entertainment president Don Ohlmeyer was worried that the audience would see Monica as "a slut" because she slept with Paul on the first date, but the producers did not share the concern. A questionnaire was issued to the audience after the taping and the results sided with the producers. The same questionnaire was issued to focus groups, whose response was the same as Ohlmeyer's, but the episode went out unaltered. The series was known as Friends Like Us during casting and Six of One at the time of the pilot, but was re-titled Friends before broadcast. Several scenes that were cut from the episode were restored when the series went into syndication, bringing the running time to 37 minutes.

Rachel – I know that you and I kinda drifted apart, but you're the only person I knew who lived here in the city.
Monica – Who wasn't invited to the wedding...?
Rachel – Oh, I was kinda hoping that wouldn't be an issue

[Rachel is supposed to be cutting up her credit cards]
Everybody – Cut, cut, cut, cut.
Rachel – [cuts a card] You know what? I think we can leave it at that. It was kind of a symbolic gesture...
Monica – Rachel, that was a library card.
[Everybody cheers her on, and she reluctantly cuts a credit card]
Chandler – You know, if you listen closely, you can hear a thousand retailers scream.
Monica – [to Rachel] Welcome to the real world. It sucks. You're gonna love it.

Joey – OK Ross, you're getting a divorce... you're angry, you're hurting... can I tell you what the answer is?... STRIP JOINTS! Come on! You're single! Have some hormones!
Ross – But I don't want to be single... I just want to be married again
[Rachel walks in wearing wedding dress]
Chandler – And I just want a million dollars!

Joey – Hey, Phoebs, do you wanna help?
Phoebe – Oh, I wish I could, but I don't want to.
Chandler – All right, kids, I've got to get to work. If I don't input those numbers-... Doesn't make much of a difference.

Ross – I'll be fine, really, you guys. I hope she'll be very happy.
Monica – No, you don't.
Ross – No, I don't! To hell with her! She left me!
Joey – You never knew she was a lesbian?
Ross – [stares at Joey] No! Okay? Why does everyone keep fixating on that? She didn't know. How should I know?
Chandler – Sometimes I wish I was a lesbian.
[everyone stares at Chandler]
Chandler – Did I say that out loud?

Ross: – Grab a spoon. Do you know how long it's been since I grabbed a spoon? Do the words "Billy, don't be a hero" mean anything to you?
Joey – Great story, but I gotta go. I got a date with Angela... Andrea... Oh, man!
Chandler – Andrea's the screamer, Angela has cats.
Joey – Right, thanks. It's Julie. I'm outta here!

Rachel – Guess what?
Ross – You got a job?
Rachel – Are you kidding? I'm trained for nothing! I was laughed at in 12 interviews today.
Chandler – And yet you're surprisingly upbeat.
Rachel – Well, you would be too if you got new boots with 50% off!
Chandler – Oh, how well you know me.

Phoebe - Wait, does he eat chalk?

Monica - Relax, this isn't even a date, it-- it's not, It's just 2 people going out to dinner and not having sex.
Chandler - Sounds like a date to me. 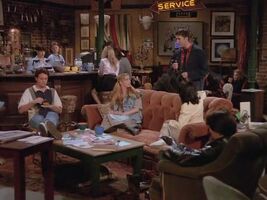 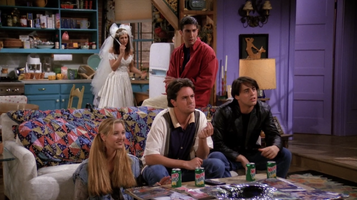 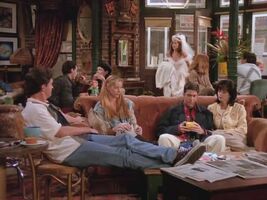 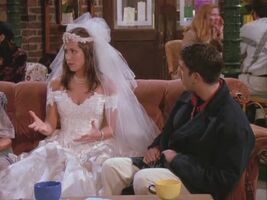 Rachel explains why she ran out on her wedding. 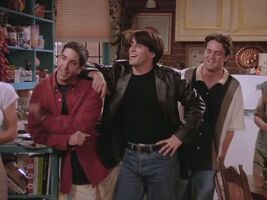 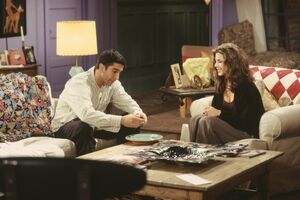 Ross and Rachel talking on her second night in the city 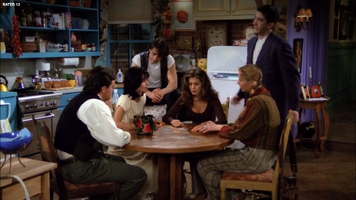