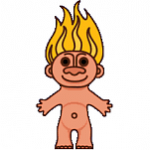 Hi, I am a veteran editor of Wikipedia and fan of the Friends series. I know the wiki software very well, especially templating, automation and calculation stuff: if you feel something can be improved in such a direction, talk to me.

I'm not a native English speaker, so if you can correct something I wrote please do.

My favorite episodes are funny or sweet. By season:

I have not seen any episode from Joey.

Welcome new users! In order for the wiki to continue its development, it should be welcoming for new users. The Wiki source markup is complex enough for newcomers and I strongly believe we should keep it as simple as practical to not discourage new contributors. We should avoid raw HTML at all costs and clean it up where found.

Here are some examples:

Style. Articles look better and more professional when the short introduction line or paragraph is well formatted and descriptive. For example:

Joey: What are you doin'?
Rachel: Moving a chair so I can have a place to sit?
Joey: No, no, Rosita does not move.
Rachel: As in... what?
Joey: As in... Rosita does not move!
Rachel: Why not?
Joey: 'Cause she is in the equal distance from the kitchen to the bathroom, and she is at the perfect angle so that no glare is coming off Stevie.
Rachel: Stevie, the TV?
Joey: Is there a problem?

Jack Geller: Well, I don't know what's in the boxes down here, but I do know there are six or seven Easy Bake Ovens in the attic.
Monica: I used to love to play restaurant.
Ross: Yeah, not as much as you used to love to play "un-cooked batter eater."
Monica: Hey, it is unreasonable to expect a child to wait for a light bulb to cook brownies!

Phoebe: I'm hearing what you're saying, but at our prices everyone needs toner.
Earl: Not me.
Phoebe: May I ask why?
Earl: You wanna know why. You wanna know why?
Phoebe: I surely do!
Earl: Okay, I don't need any toner because I'm going to kill myself.
Phoebe:(flips through the script the company gave her) Um... is... is that because you're out of toner?
Retrieved from "https://friends.fandom.com/wiki/User:5ko?oldid=77744"
Community content is available under CC-BY-SA unless otherwise noted.